[Another essay from 2007 about our difficulties seeing the present through the lens of the past’s futures.] 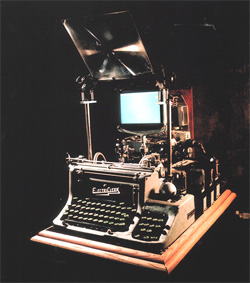 We find ourselves, as I wrote a bit ago in an essay called The Empire of Crime, without a contemporary sense of our immediate surroundings or much of a model for a working future.

This lends an air of surreality to our thinking. Like the hero of William Gibson’s story The Gernsback Continuum, we are shadowed by visions of a future not our own:

Mercifully, the whole thing is starting to fade, to become an episode. When I do still catch the odd glimpse, it’s peripheral; mere fragments of mad-doctor chrome, confining themselves to the corner of the eye. There was that flying-wing liner over San Francisco last week, but it was almost translucent. And the shark-fin roadsters have gotten scarcer, and freeways discreetly avoid unfolding themselves into the gleaming eighty-lane monsters I was forced to drive last month in my rented Toyota. And I know that none of it will follow me to New York; my vision is narrowing to a single wavelength of probability. I’ve worked hard for that. Television helped a lot.

Indeed, we’re irrationally hung up on the past’s visions of the future. Check out Gareth Branwyn’s photo tour of steampunk hobbyist artifacts:

Retro-futurism is all the rage these days: antique computers, 8-bit game art, classic cases for modern gear, anything to make the onslaught of new technology less disposable. The yearning for timelessness in a constantly renewing tech culture has led to a spike in interest in the steam-powered, brass-encrusted world of steampunk.

Henry Jenkins, echoing William Gibson, calls this sphere of anachronistic futurism “The Tomorrow That Never Was”:

Amateur archivists have assembled digital reproductions of the covers of pulp science fiction or popular science magazines, cataloging the various technological wonders or predictions by which an earlier generation sought to understand the directions their society was taking. Others have gathered together home movies, post cards, and every other available media artifact to construct detailed tours of the 1939 fair, showing every building inside and out. Such activities blur the line between private collections and shared archives as hobbyists become curators to show off their own holdings and to educate others into the lore of retro culture. Some of these experts will go on to construct beautifully illustrated coffee table books (of the kind that Gibson described in his short story) which in turn can be sold to niche publics of consumers via sites like Amazon. And small companies will use the web to sell lower-cost reproductions of historical toys and souvenirs for those who lack the resources to purchase the original: the digital tour of the 1939 World’s Fair, for example, has its own gift shop where one can buy a whole range of retro goods.

It is well known that the baby boom generation uses sites like eBay to reassemble stuff their mothers threw away when they left for college (old toys, comics, baseball cards, and other junk). But these same web 2.0 platforms allow us to collect together information or accumulate artifacts from our parent’s and grandparent’s generation. Relatively few of the people who are trading in memorabilia for the 1939 World’s Fair are old enough to have actually attended the event. Rather, they are fascinated with images of a future that had already started to fade from consciousness before they were even born, suggesting a variation on Stephen Greenbelt’s claim that history writing involves a fascination with speaking with the dead.

Of course, the dead with whom we are speaking when we engage in this nostalgic futurism are the dead visions of an earlier age, and they compel us so strongly precisely because our own visions elude us, offering as yet only terrifying glimpses of a ruined planet. When we look ahead, the skies darken, and we see not aluminum cities of flying cars, but a “global Somalia.”

No wonder, then, that we cling like a monkey with a wire-brush mama to the idea of a future in which engineering conquers the human condition, where we can leave off serious worrying about the planet until the godlike AIs get here, and in which, in any case, we can always jump ship and scuttle off to another planet if things get too hot.

Unfortunately, wishing doesn’t make it so. Indeed, more and more of our best futurists, science fiction writers and big thinkers are trying to get us to dump our threadbare inherited tomorrows into the recycler, if only so we can start to think seriously about the real challenges we face today. A great example is Charlie Stross’ brilliant post The High Frontier, Redux, in which he eviscerates the whole idea of space colonization:

Historically, crossing oceans and setting up farmsteads on new lands conveniently stripped of indigenous inhabitants by disease has been a cost-effective proposition. But the scale factor involved in space travel is strongly counter-intuitive.

Here’s a handy metaphor: let’s approximate one astronomical unit — the distance between the Earth and the sun, roughly 150 million kilometres, or 600 times the distance from the Earth to the Moon — to one centimetre. Got that? 1AU = 1cm. (You may want to get hold of a ruler to follow through with this one.)

The solar system is conveniently small. Neptune, the outermost planet in our solar system, orbits the sun at a distance of almost exactly 30AU, or 30 centimetres — one foot (in imperial units). Giant Jupiter is 5.46 AU out from the sun, almost exactly two inches (in old money).

We’ve sent space probes to Jupiter; they take two and a half years to get there if we send them on a straight Hohmann transfer orbit, but we can get there a bit faster using some fancy orbital mechanics…

The Kuiper belt, domain of icy wandering dwarf planets like Pluto and Eris, extends perhaps another 30AU, before merging into the much more tenuous Hills cloud and Oort cloud, domain of loosely coupled long-period comets.

Now for the first scale shock: using our handy metaphor the Kuiper belt is perhaps a metre in diameter. The Oort cloud, in contrast, is as much as 50,000 AU in radius — its outer edge lies half a kilometre away.

Got that? Our planetary solar system is 30 centimetres, roughly a foot, in radius. But to get to the edge of the Oort cloud, you have to go half a kilometre, roughly a third of a mile.

Next on our tour is Proxima Centauri, our nearest star. …But Proxima Centauri is a poor choice, if we’re looking for habitable real estate. While exoplanets are apparently common as muck, terrestrial planets are harder to find; Gliese 581c, the first such to be detected (and it looks like a pretty weird one, at that), is roughly 20.4 light years away, or using our metaphor, about ten miles.

Try to get a handle on this: it takes us 2-5 years to travel two inches. But the proponents of interstellar travel are talking about journeys of ten miles.

I’ll believe in people settling Mars at about the same time I see people settling the Gobi Desert. The Gobi Desert is about a thousand times as hospitable as Mars and five hundred times cheaper and easier to reach. Nobody ever writes “Gobi Desert Opera” because, well, it’s just kind of plonkingly obvious that there’s no good reason to go there and live. It’s ugly, it’s inhospitable and there’s no way to make it pay. Mars is just the same, really. We just romanticize it because it’s so hard to reach.

To which Charlie responds, “Colonize the Gobi desert, colonise the North Atlantic in winter — then get back to me about the rest of the solar system!”

Space ain’t the final frontier. The physical frontier is closed — as Norman Mailer puts it “shut, damn shut, shut like a boulder on a rabbit burrow” — and we live now, and probably forever (at least in culturally meaningful terms) in a world of physical limits. And despite promises of medical immortality, it looks like we may not live forever after all, while the smart robots don’t seem to be coming to save us.

Some see, in the loss of this Machine Age dream of the conquest of nature and all natural limits, the loss of possibility. That seems silly to me: the possible still lies stretched out all before us. I believe, in the core of my being, that H.G. Wells was right when he said “”All the past is but the beginning of the beginning: all that the human mind has accomplished is but the dream before the awakening” If we survive this crisis, humanity has ahead of it vast seas of time to create and grow and deepen. We may even one day find the technological equivalent of the alchemist’s stone, and bend the physical stuff of the universe to our purposes (hopefully without destroying ourselves in the process) — but in the meantime, we’re at home on Earth and staying here, and all good work needs to respect the limitations a single planet places upon our endeavors.

There is still plenty of room for heroic ingenuity. Just because we disdain the possibility of magical, consequence-free technofixes doesn’t mean we don’t admire and seek good tools (in fact, quite the opposite, if we’re sensible — realizing that the task is much harder than thought by the technofixers, we realize we’ll need every tool we can get our hands on). Similarly, recognizing that space colonization is no answer to our planetary problems doesn’t mean that we don’t want to explore space, and learn as much about our planet and its surroundings as possible (the whole Greens in Space argument). Indeed, with the explosion of private space tourism efforts, we need to begin thinking seriously about space law. A sustainable civilization will be even more technologically advanced than our own, and remarkably more sophisticated in its thinking about science, technology and progress.

And that’s just the point: change has accelerated, just not in the direction our grandparents and great-grandparents expected. We still need to think ahead. Learning to see the shortcomings in these antique tomorrows we’re still dragging around with us may make us more intelligent creators of new visions. If we can let go of the way the past saw the future, we may be able to think anew about what is to come.