The Empire of Crime 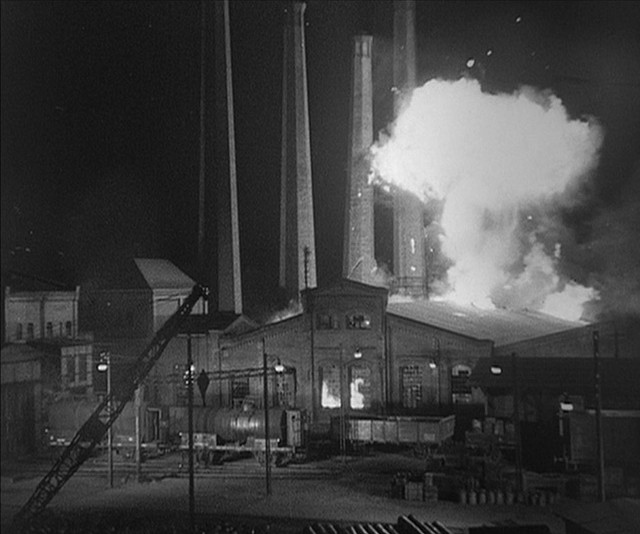 [This piece from 2007 is one I decided to take another look at recently.]

We carry its marks, but the machine age is dead to us — oh, the assembly lines roll on in Mexico, the coal stacks still smoke in China, giant container ships still ply the seas bringing cars and appliances and laptops and clothes, but the ability to shock and disorient that the machine age once possessed is gone from the world of pretty much everyone with the hardware to read this.

We feel no more historical vertigo considering the Machine than we do the Dawn of Agriculture, and few if any of us wake up in the morning with a sense of deep angst about the move from hunting and gathering to sowing and reaping. There may be, as Gary Snyder says, no such thing as a post-agricultural civilization, but we already live in societies that take agriculture so much for granted that we feel those who live by any other means to be nearly alien. The same will very soon be just as true for industrialization.

To see this new reality, one need only look backwards. The other night it rained hard here in Seattle — in big warm drops that pinged off the skylight and drummed on the roof and lifted a metallic smell off the blacktop outside — and I took the night off, cooked some pasta and watched Fritz Lang’s classic 1933 film, The Testament of Doctor Mabuse.

I absolutely loved Mabuse! At first glance, it’s a straight detective story, with Inspector Lohmann (Otto Wernicke, playing one of the greatest cops ever caught on film) trying to crack a criminal conspiracy. But the conspiracy turns out to be anything but the usual organized crime syndicate: instead it is the evil cabal of the mad Doctor Mabuse, whose intellect is so powerfully twisted that even locked in an asylum in a catatonic state he can sway others to his cause through his insane scribblings.

Mabuse’s aim? A “reign of terror” brought on by “the empire of crime” — the destruction of society through terrorism. Mabuse’s writings direct his henchmen to rob jewelry stores, commit assassinations, destabilize currencies, and blow up a chemical factory, poisoning the city’s inhabitants. His testament — a mix of handwritten words and drawings which resemble the kind of freehand journal kept by the more sensitive type of disturbed 13-year-old girl — is so potent that the evil Doctor is able through his mad writings to exert powers of hypnosis and turn a formerly good psychiatrist into an insane agent of evil who channels his personality. It’s great stuff, which despite the gulfs of seven decades and a foreign language, kept me totally riveted and smiling.

But after the film ended, I was left with a strange feeling, more akin to watching a really good and trippy science fiction movie than an old detective film, and after a couple of days thinking about it, I think I know why: Lang’s sensibility in making Mabuse is every bit as alien as some outlandish futuristic world.

When life seems daily to be out-pacing the speculative fiction which is meant to induce a sense of wondrous future shock in our lives, the mindsets of 1930s modernists are as distant as colonies on Mars.

And Mabuse echoes in profound ways the concerns of its day: the pace, sophistication and industrialization of urban life. From its camera work and its use of sound (still novel for its time) to it expressionist graphics and modernist design fetishism (at one point, the heroine actually begins caressing a lampshade, in a way that marks her perfectly as the future target market for Dwell), the film alludes to the rise of a new mechanized city culture. Technologies (what were, in their day, the red-hot emerging technologies) are raised almost to the status of characters in the film: recording devices, scientific equipment for crime scene forensics and ballistics, cars and pistols and telephones (and thus car chases, gun fights and the tracing of mysterious calls) all play prominent roles.

All of this, though, builds to the film’s prime question: “Who will use these incredible new technologies and capabilities, and to what end?” Lohmann uses them, in a sardonic style that can’t hide his essential decency and bravery, to defend the public good, democracy and justice; Mabuse wants to use them to exert his power over the course of history. Indeed, Mabuse’s testament reads much like the transcript of a bin Laden cave video. Here is a man who does not hesitate to destroy the innocent to make room for the promise of a vague, “purified” new order.

The resemblance to Nazism was intentional. Mabuse — which tangentially was produced at UFA, where I stayed when last in Berlin — was censored by Goebbels himself and banned throughout the Reich. Lang fled Germany almost immediately afterwards, with the film’s premier being held in Budapest. The idea that a madman might use the force of personality and modern technologies to wreak havoc on the world unless good people stopped him was not, apparently, a welcome cinematic theme.

Of course, the same fear of technologically empowered madmen cuts both ways. Despite much clear evidence that fundamentalist crazies, while dangerous, are not our greatest concern as a civilization, politicians unburdened by scruples have, the world over, taken these old fears, these worn-out puppets, dressed them in new outfits, called them by new names, and used them to frighten and distract the people. Frighten them into giving away their liberties. Distract them from the naked greed of the puppet masters. What a boring old game.

Just how old these fears are is really best demonstrated by the degree to which nostalgia is actually our primary attitude towards the era which spawned them. From steampunk and the vogue in old industrial design to retro politics and “greatest generation” propaganda about Pearl Harbor, the Spanish Civil War and the nobility of fighting the Fascists (implying our current struggles are the same), our societies are riddled with longing for and distance from the realities of those days. We are not our grandparents, though, and their world is as extinct as the Tasmanian tiger.

Really, what we ought to worry about (and hunger for) are those new facets of our time that we’re just now gaining the insight to both fear and desire.

Emerging technologies, like nanotechnology and biotechnology, ought to worry us in their potential to be used stupidly, carelessly or with evil intent, yes.

But more importantly, all that we believe to be solid is melting into air, again. The world in which we live will no more last out our lives than the ice box, buggy whip or telegraph delivery boy outlasted theirs.

We live in a deeply networked, interconnected world, a world where the leapfrogging of technology is mingling with the annihilation of distance to produce a future which not only feels different, but runs by different rules.

Some of those rules should scare us, within reason. John Robb, in his excellent new book Brave New War: The Next Stage of Terrorism and the End of Globalization

, makes the point that it is the very nature of the systems upon which we currently depend — centralized, hierarchical, brittle and above all, closed, proprietary and secret — that makes us most vulnerable to the depredations of small bands of networked terrorists. Our industrial system is like one giant, opaque Windows operating system, just waiting for the next wave of attacks to bring it crashing down, and its very opacity is its biggest threat: “We are vulnerable because we don’t know, and our vulnerability is actually increased because we don’t know.”

The only sane response to these dangers is the opposite of our current approach (which Robb calls “Knee-Jerk Police States”): it is a society-wide shift to openness, transparency and planned resilience.

That sounds tedious and burdensome, but the reality could be dynamic and creative and prosperous — a million experiments in diversifying (and making more sustainable) the energy, food, water, materials and communications systems we depend on to supply our lives. The likelihood is that, for most of us, attention to these systems, and innovative thinking in our interactions with them, will become more and more a fact of daily life, from farmer’s markets to home water purification systems and solar panels, to the steps we take to increase neighborhood survivability. But that, too, can have its rewards.

The same is largely true in regards to the other dramatic issue of this new globalizing world: immigration and the melting of borders. The fact is, we here in the developed world need the labor and energy of young migrants, and with an international economy in which (as Cory Doctorow puts it), any job that can described can be outsourced, we need, now, to embrace the border-hopping multiculturalism which already defines our societies, and develop new ways of working together with folks in distant places, whether through community-supported trade or new models of migration. Such challenges shouldn’t be seen only as problems, though: there is every reason to believe that we can meet them by creating a fairer, more prosperous and more stable world.

In a similar way, though we’re used to thinking of cities as unusually artificial, dragging along behind them all the baggage of modernity, but the fact is we now live on a planet not only of cities, but of this new species, megacities… and this is a good thing — if we can learn to think about cities and their possibilities in new ways.

We’re used to thinking of humanity and nature as opposed, but again, the new reality is a paradigm rift in which we are both responsible for learning how to properly manage the planet (since we’re already engaged in planetary management, altering its climate and curating its biodiversity: we’re just doing it badly), and for bowing to natural forces, patterns and designs to grow a successor to the old model of industry which will now respect and work with and like nature. Or we can just drive the whole bus off the cliff.

Even that most central pillar of modernity — consumerism — is changing. The kinds of transformations that await us on the other side of one-planet living I suspect may feel unrecognizable when seen from the perspective of the Twentieth century: products delivered as services, producer responsibility, zero-waste standards, strategic consumption, reputation economics, supply-chain activism, even, possibly, the end of ownership as we know it. There is a very good chance, I suspect, that being a highly networked, affluent megacity dweller in the next decade will be as culturally distant from being a well-off suburban industrial manager as that was from being a prosperous village grain-miller operating his own windmill. Again, this will probably be a good thing.

For all the horrors that might await us, there exist an equal number of shimmering possibilities. We live at the twilight of the Industrial Era, and at the dawn of another. What sort of an era this will be depends, in many ways, on how well we dance what inspector Lohmann in Fritz Lang’s film calls “the fine line between genius and madness” and how many of us choose, in the end, to put the powers we are gaining to the service of all.

So who’s going to make that movie?