Some of you may know that I have a fascination with the early modern world of the Seventeenth Century. The coffeehouses and first newspapers and public theaters that gave rise to the modern sense of “the public” (there was a great CBC series a few years back called “the origins of the modern public” that seems to have slipped into linkrot), or the radical political evolutions of the English Revolution (a subject I’ve now been reading on for two decades and still haven’t plumbed the bottom of), or the rise of the modern corporation in the Netherlands at the time: I find it all fascinating and completely contemporary, or at least find in it the roots of much we see around us now. 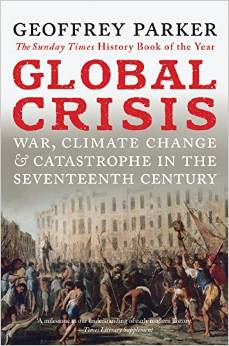 So I was intrigued when I picked up Global Crisis: War, Climate Change and Catastrophe in the Seventeenth Century [link]. This thing’s a monster (800+ pages), so I’ve more been reading at it than reading through it; nonetheless, it’s brought a new resonance to my early research. The author, Geoffrey Parker, makes a strong case that the “general crisis” besetting Europe and much of the rest of the world in that era was driven in large part by the “Little Ice Age” and the climate chaos it brought. Read it yourself and judge the merit of his argument.

What interests me about it, though, is that my hunt to know the nature of the early modern is driven by the sense that—despite the amazing leaps its new ways brought to humanity in democracy, science, commerce and culture—its impetus in our society is nearly spent. And if climate chaos helped generate the underlying hunger for change which made it possible, perhaps our current crisis is doing something similar today? Where would we look to find out? How would we know when we saw it?