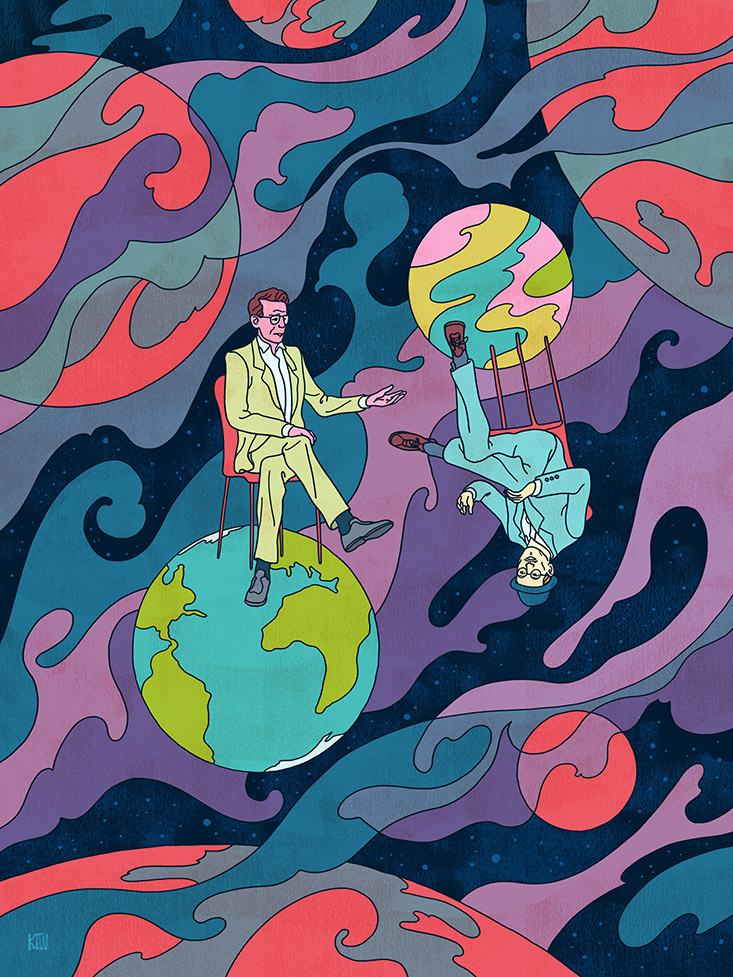 "I think we can make it through this current, calamitous time period. I envision a two-part process. First, we need to learn what to do in ecological terms. That sounds tricky, but the biosphere is robust and we know a lot about it, so really it’s a matter of refining our parameters; i.e. deciding how many of us constitutes a carrying capacity given our consumption, and then figuring out the technologies and lifestyles that would allow for that carrying capacity while also allowing ecosystems to thrive. We have a rough sense of these parameters now.


"The second step is the political question: It’s a matter of self-governance. We’d need to act globally, and that’s obviously problematic. But the challenge is not really one of intellect. It’s the ability to enforce a set of laws that the majority would have to agree on and live by, and those who don’t agree would have to follow.


"So this isn’t a question of reconciling gravity with quantum mechanics, or perceiving the strings of string theory. Instead it involves other aspects of intelligence, like sociability, long-range planning, law, and politics. Maybe these kinds of intelligence are even more difficult to develop, but in any case, they are well within our adaptive powers.

[Warren Ellis gives one of the smartest talks you'll hear about futurism, scientific magic and working "in league with the fantastic."]

"Not far from Kulenus, I met a family that had been planning to leave their shrinking island the week before, but chose to postpone to wait out stormy weather. They’d go in just a few days, moving to a larger island nearby. With her five-year-old granddaughter hugging her waist, Evodia Elias pointed over the water to show me how far the land once stretched: “This island was down there,” she said. “It was a big island, and now it’s getting small.” As on Kulenus, the area where she once gardened was gone, eroded into the water; sometimes, she said, when rough seas keep people from leaving the island to fish or visit gardens elsewhere, there isn’t enough food. She was the first “official climate refugee” I’d ever met, and she had a question for me about the water that was forcing her out of her home: “Some people were telling us that it depends on the ice melting, and that’s why we have these high tides,” she said. “Is that true?”


"Elias had heard that ice was melting, but hadn’t heard why. No amount of reading or writing about climate change can really prepare you to look into the face of someone who will soon flee her home and explain the greenhouse effect. It was hard to know where to begin — which new terms and concepts would need further explanation? — and I stumbled. When I awkwardly described the role of distant cars and factories (“putting something in the atmosphere that traps the heat of the sun”), I expected anger but got a resigned, knowing nod. In Papua New Guinea, where most people see little benefit from an export economy based on poorly regulated mining, logging, and agribusiness, people are familiar with paying a local cost for foreign gain."

The Myth of AI

"The distinction between a corporation and an algorithm is fading. Does that make an algorithm a person? Here we have this interesting confluence between two totally different worlds. We have the world of money and politics and the so-called conservative Supreme Court, with this other world of what we can call artificial intelligence, which is a movement within the technical culture to find an equivalence between computers and people. In both cases, there's an intellectual tradition that goes back many decades. Previously they'd been separated; they'd been worlds apart. Now, suddenly they've been intertwined.


"The idea that computers are people has a long and storied history. It goes back to the very origins of computers, and even from before. There's always been a question about whether a program is something alive or not since it intrinsically has some kind of autonomy at the very least, or it wouldn't be a program. There has been a domineering subculture—that's been the most wealthy, prolific, and influential subculture in the technical world—that for a long time has not only promoted the idea that there's an equivalence between algorithms and life, and certain algorithms and people, but a historical determinism that we're inevitably making computers that will be smarter and better than us and will take over from us."