When Victor designs a software interface, he doesn’t do it to deliver functionality — he does it to advance an argument, in much the same way that 20th-century utopian architectural designs were never really intended as functional building plans. Victor’s UI demos are primarily manifestos on the sorry state of computer-assisted thought, framed with the same fire-eyed rhetoric of any Italian Futurist.

A talk entitled “Media for Thinking the Unthinkable” sounds like an interaction-design equivalent of Lovecraft’s At the Mountains of Madness; it’s actually a sober and rather technical demonstration of Victor’s various UI schemes for visualizing scientific models and engineering systems. And in the introduction to his “Kill Math” project — actually a quite benign, if broadly ambitious, attempt to reimagine mathematical notation in more intuitive and visual terms — Victor declares that “the power to understand and predict the quantities of the world should not be restricted to those with a freakish knack for manipulating abstract symbols.”

These projects, Victor says, are just “nibbles around the edges” of his larger obsession: how the media in which we choose to represent our ideas shape (and too often, limit) what ideas we can have. “We have these things called computers, and we’re basically just using them as really fast paper emulators,” he says. “With the invention of the printing press, we invented a form of knowledge work which meant sitting at a desk, staring at little tiny rectangles and moving your hand a little bit. It used to be those tiny rectangles were papers or books and you’re moving your hand with a pen.

William Gibson On the Apocalypse, America, and The Peripheral’s Ending

Q: We don't really have any state actors in this future. We have a few people working for the government, but mostly for crime bosses and corporations. Were you thinking about about the future of governments? I thought it was so interesting that the characters are basically able to take over Flynne's state, whatever it is.

A: Flynne lives in a more fully corrupt, third worlded version of contemporary America. Given that they have literally a magical ability to make money, what could they not do? That was my assumption. If somebody had that ability right now, here, what could they not do? It's literally magical. A lot of this narrative is rather consciously a fairy tale. Its costumes are highly naturalistic scifi, but the things that motivate the plot are stuff like a fairy godmother, you know? There's the all-knowing eye – that kind of thing. None of which – deliberately – is ever really plastered over with verbiage designed to convince you it's possible. I think that kind of verbiage is all bullshit anyway.

No island is an island

In the ‘post-national’ 21st century, borders are no longer as fixed as national jurisdictional law suggests. Australia has, at times, excised itself from its islands to handle the politics of asylum‑seeking. Would-be migrants, seeking refuge in Australia, are held on offshore islands until their status is legitimated or denied. By this means, successive Australian governments have deprived vulnerable people, including children, of basic human rights. For the sake of domestic political convenience, the nation of the plastic stencil sometimes defines itself without the islands where refugee boats land. The fact that people abandon nations and passports because of global pressures, because of the impossibility of being at home where they were born, is part of what is changing the nature of nations in a global world. People are no longer from where they came from. They become citizens of where they wash up, or the world. Island-mindedness – the separation of places from other places – is no longer an option.

In this global world, it is flows and circulation, rather than land parcels, that are important. Just as Google maps and GPS have become widespread, territoriality is changing. Flows are about land-and-sea-and-sky-and-people – a collective consciousness that is hard to represent on a 2D map or a phone app.

The island-minded idea of nature, separated from culture, has also changed. Some say we are at the ‘end of nature’: there is now a human signature on all the global flows: the biophysical system is also cultural, as the new epoch of the Anthropocene is imagined. To rework the poet John Dunne, no island-nation is ‘entire of itself’, nor can any island-nature be other than ‘involved in mankind’. Perhaps the bell now tolls for the last island: the blue marble of planet Earth, an island in the infinity of space.

We think we are in a very lucky spot in that we’re early enough in this to be important, to help lead the rest of the world, but we’re not the first. So we’re able to learn from other jurisdictions. We’ve looked at what has happened in Europe [with its cap-and-trade system], the excess volatility they had early in the market, and we have mechanisms to deal with that. We’ve looked at the response in market conditions to how you recycle the dollar, through our program to help low-income people. We’ve looked at measures to help energy-intensive industries. We’ve learned from those experiences. We’re really in a good spot to be able to say, you know, somebody else developed the steam engine here, and now we’ve got the second edition that we can use.

What Is a Von Neumann Probe?

A Von Neumann probe is a robot designed to reach distant star systems and create factories which will reproduce copies themselves by the thousands. A dead moon rather than a planet makes the ideal destination for Von Neumann probes, since they can easily land and take off from these moons, and also because these moons have no erosion. These probes would live off the land, using naturally occurring deposits of iron, nickel, etc. to create the raw ingredients to build a robot factory. They would create thousands of copies of themselves, which would then scatter and search for other star systems. 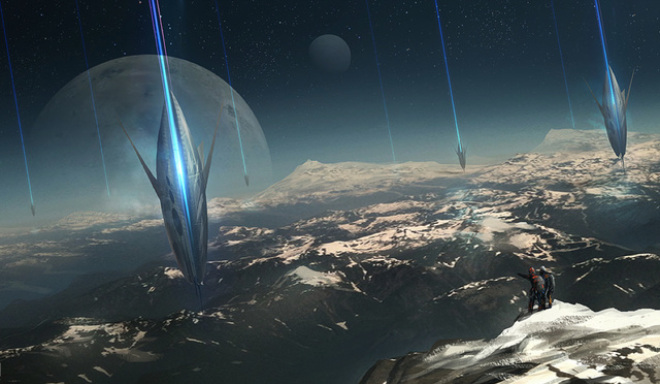