How Not to Redesign a Suburb

Every few weeks, someone sends me an article, a study, a design competition for redesigning or retrofitting suburbia. The idea that we’ll need to do something about the suburbs has grown hot.

Unfortunately, most American ideas for suburban redesign seem almost universally to fail to understand systemic shifts involved. I suspect this failure is related to insanity of US debate on oil, climate, climate impacts and social shifts. People have a hard time imagining that what we think of as normal now no longer describes current reality.

As I wrote in a Worldchanging piece last year (Outer Ring Suburbs and the Permanent Foreclosure):

Many still debate that anything about the American model of sprawl development needs fixing, but most understand that something has gone seriously wrong with the outer-ring suburbs that more than a quarter of American call home. It doesn’t take a futurist to look at the conditions on the ground — long commutes, auto dependence, the expected steep rise in oil prices, environmental problems, the bursting of a massive financial bubble (resulting in millions of abandoned homes and ruined families and a wave of bankrupted suburban local governments) — to realize that they suburbs are in deep trouble, and that trouble is just going to get worse.

Indeed, the more we understand about the scope, scale and speed of the changes we face, the worse things look for the more sprawling, auto-dependent suburbs we’ve built in the last 30-40 years. 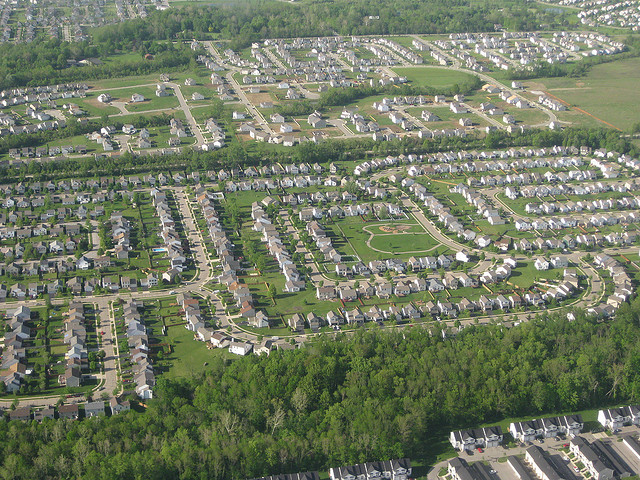 And when a suburb was built is critical. A sharp distinction needs to be made between older, inner-ring suburbs (often comparatively dense, with “good bones” that can allow infill development and redevelopment of auto-focused commercial arterials into people-focused streets, close enough to central cities to participate in joint transit and infrastructure planning) and the outer-ring suburbs and exurbs built since the 1980s (which tend to be extremely low-density, poorly suited for redevelopment and distant from central cities). Any project approaching suburbia without knowing what kind of suburb it hopes to redesign is hopelessly lost from the start.

In many places, the inner-ring has already begun a process of semi-urbanization. Since we don’t know of any reality-based sustainability/resilience program for developed world lifestyles that doesn’t involve density, walkability, transit and efficient infrastructure, the ability of inner-ring suburbs to urbanize themselves in practical steps actually offers real hope to those places, despite the extreme strains many currently find themselves under. But the answer remains clear: urbanize, rapidly, in as innovative and practical a way as can be found.

The outer ring suburbs are a different story. They have no useful systems on which to build, and small tweaks will make no difference to their performance. If you treated them as vacant land, with a few structures and bits of infrastructure that might be re-usable, I suppose you could build a completely new urban community on top of them, but why would you want to, since they’re far away and disconnected from central cities? And, of course, outer ring suburbs/ exurbs are not vacant land, and the people who own those houses (even the foreclosed empty ones) are unlikely to embrace a plan of total reconstruction.

The common design response to the apparent impossibility of urbanizing the outer-ring is to rusticate it. Turn it back into farmland. This idea, too, proceeds from false understandings of the systems involved, as I wrote before:

Often, the thinking behind new suburban design provocations seems to go something like this: the problem with the outer ring is that it’s too spread out; therefore, let’s make that weakness a strength and use all that land between the buildings, say, for farms and wildlife habitat. On the surface, it might appear to make sense, but reality is far less forgiving.

The reality is that because of the way we build suburbs, the land left underneath has limited value either as farmland or as habitat; it has neither the benefits of proximity of truly urban gardening, nor the richness of undisturbed land farther out; while pulling out buldings and roads, mitigating toxics, re-shaping the flow of water over the land and restoring ecosystems essentially from scratch is such an expensive process that it will never make sense as long as really critical prime habitat remains endangered elsewhere (which will likely be the case for the foreseeable future). The “asset” of open land that outer ring suburbs have is not a very valuable one, in ecological terms.

The answer is, as far as I can see, that no solution is going to save most of the Outer Ring, especially the most exurban parts of it. It was a bad idea to build it, it’s unsustainable, and neither the economics nor the ecology of any of the solutions I’ve seen will pencil out for most of the hintersprawl slowly decaying around our core cities and inner-ring suburbs. The longer it takes us to admit how dire the situation is, the more billions we’ll pour into trying to prop up places that seem pretty destined to collapse. That’s good money after bad.

Of course, some outer-ring suburbs are doing just fine, and probably will for some time, because their residents are extremely wealthy. Many outer-ring suburbs are too wealthy to fail; and while they’re too expensive for ordinary people to maintain, the rich have the money and clout to hold on indefinitely. I expect there will be people living in McMansions and driving big cars and practicing conspicuous consumption for many years to come, no matter how bad things get. Extreme wealth trumps even very strong price feedbacks on energy and carbon (though if these areas become essentially uninsurable, as is possible, then all bets are off). As long as they’re willing to pay the true cost of their actions, I don’t have anything against them living however they choose.

But most of the Outer Ring is not that wealthy. Most outer-ring suburbs cannot absorb the rising costs of their choices or address the increasingly expensive vulnerability of their systems, and the rest of us can’t afford to subsidize them. In truth, the best public policy approach may just be harm reduction.

So, enough with the foreclosure farm schemes and the McMasion retirement homes and the “re-imaginings of suburban life” based on hydrogen cars, robot caretakers or aesthetic retrofits! I’m in favor of bold visions, but these deny hard realities: they are pipe dreams. Pipe dreams are not helpful in a crisis.

If you’re a designer, engineer, planner, public policy wonk and you want to put your insight and acumen to work, then think about this: How do we take the third of metro America that is the Inner Ring, and urbanize it — practically, in an innovative and affordable way — before the clock runs out?

I’d like to go into this in more depth and nuance, but I don’t have time to write more today. This is a topic, though, that bears returning to again and again.