**From the archives - this post was originally published on Worldchanging.com, October 15th, 2004** 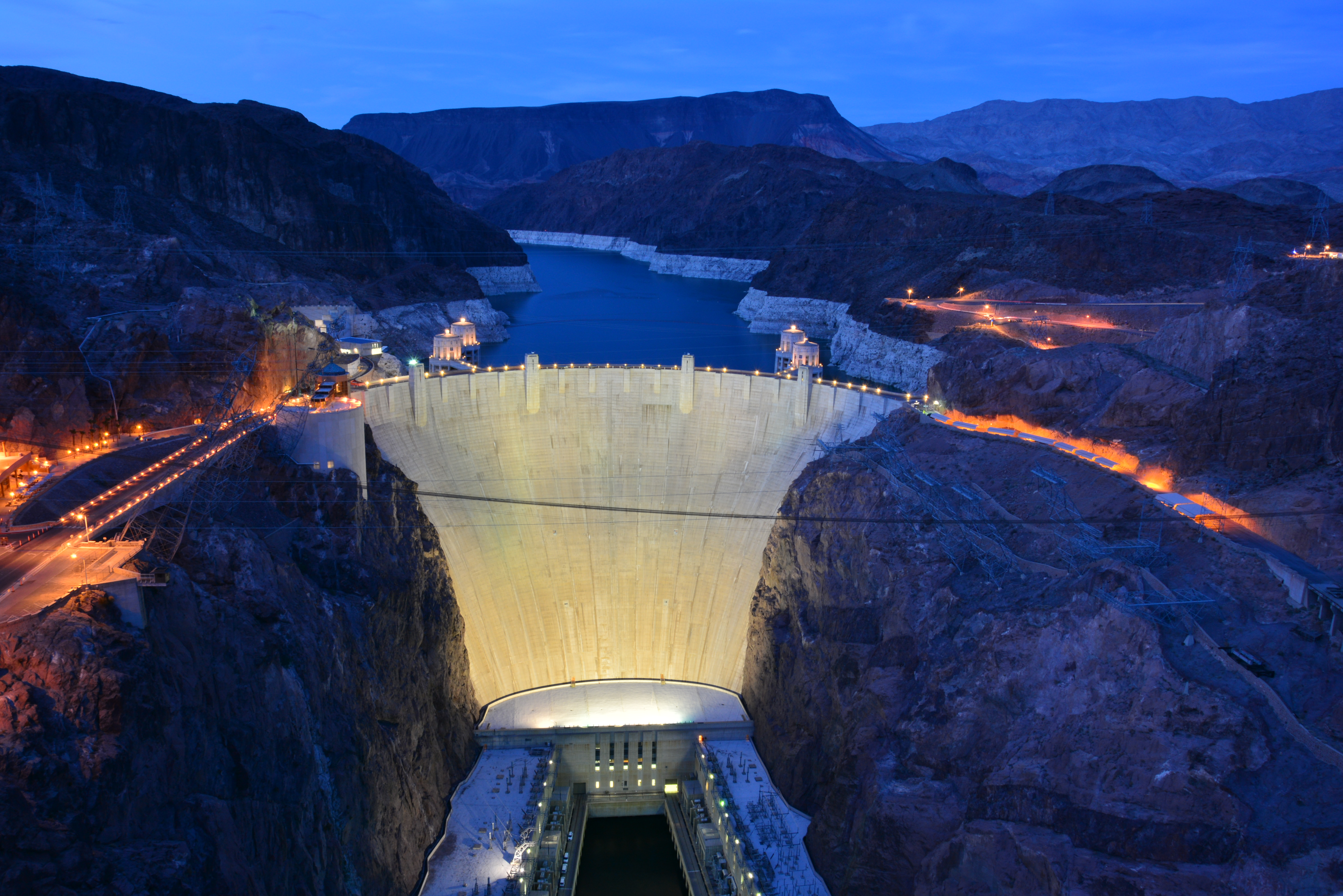 Just to the southwest of Las Vegas runs the Colorado River. Or rather, it used to run. Now it just sort of lies there, comatose, behind the Hoover Dam.

The Hoover Dam is a marvel of engineering (if I were that kind of journalist, I'd bombard you here with a bunch of statistics involving tons of concrete and the number of men accidentally entombed in the dam's south wall during construction -- luckily for both of us, I'm far too lazy for that). It is also the only reason why the Southwest as we know it exists. Without the Hoover (and its scores of smaller cousins) the Southwest would look like what it actually is: an arid desert.

But none of this is on my mind as I approach it. Sleep; sleep is what's on my mind. My map lists shows a campground just on the other side of the Colorado, and I figure I can cruise over there, pitch my tent and get a few hours of REM in before the sun rises and things start to cook. In fact, I'm so tired that I barely notice I'm nearing the dam until I come to a Security Check Point.

Three also tired-looking men start moving around my car, looking at things, checking the wheel wells, while another, a young black guy with a clipboard starts asking me questions about where I'm from and what I'm doing.

"Magnificent place," I say. "You should."

"How's the fishing up there?" Now, I know nothing about fishing, but I suddenly had this weird feeling like maybe this was part of the test. After all, the man asking me was wearing a gun.

"Uh, it's, great," I say. The other guys are shining their lights through the windows of my car.

He nods, enthusiastically. "Lots of trout?"

We chat for a while more about fishing, much in this vein, until the other guys finish walking around idly shining their lights into my car, then he waves me cheerily on. These guys couldn't have bought a vowel, much less found any explosives I had. Another cheap shake-down of my civil rights in the name of fighting terrorism. Wave me off, "Thanks." "Fuck you very much," I say, with the window up, about a hundred yards off the bridge.

I decide I must smoke some Humboldt hippie pot immediately. If I don't, the terrorists have won.

I pull off a sideroad, drive down a long hill, end up at a boat launch below the dam. A sign: a tent with the universal NO circle. I look around. A few parked cars lie under the scraggly trees and three streetlights, but nobody's to be seen, so I crank the seat back, pull my sleeping bag over me and try to get some rest.

All is still, here. With the windows down, and the moon roof open, I smell desert air, and gasoline fumes. The streetlights flicker off. I can see one end of the dam in the distance, lit by floodlights. A small boat splashes by on the other side of the river, then it too is gone. If there was once beauty here, it has long since been ground out of the place.

I think of something I'd read by Neal Stephenson: "[L]ike refugees from a plague city, they carry that which they fled with them. As soon as they arrive, the subdivisions start multiplying, a strip mall goes up (inevitably, as has been noted, bearing the name of the local landmark it replaced), and people start clamoring for Starbucks and high-speed Net access. Pretty soon, people look around, say 'this place ain't what it used to be,' and start looking around for the next place to go. ...With their power tools, portable generators, weapons, four-wheel drive vehicles, and personal computers, they are like beavers hyped up on crystal meth, manic engineers without a blueprint, chewing through the wilderness, building things and abandoning them, altering the flow of mighty rivers and then moving on because the place ain't what it used to be."

I get out of my car and go and sit on the shore. Empty beercans and junkfood wrappers bob on the ripples in the water. And, sitting on that littered shore, of what was once one of the mightiest rivers on the continent, with the smell of Vegas still on my skin, I have to wonder if maybe we don't deserve whatever's coming. Maybe we care too little, are too willingly bribed to blindness with manufactured dreams. Maybe we just don't have it in us anymore to bear the weight of what we'd created. Maybe our society really is, like Pound said, an old bitch gone soft in the teeth.

Somewhere in the distance, a motor starts up, coughing; sputters, stops. Then silence.

And, though I'm not happy to admit it, what I felt then, sitting there in the silence by an almost-dead river, was not sadness, but a sort of elated resignation.

Fuck it, I thought. Tear it down. Blow it up. Let it all go smash. "When the cities lie at the monster's feet, there are yet the mountains." Light out to the territories. Clear out to someplace far and safe, watch it burn and build something newer, stronger, cleaner on the ashes. Screw the book, start the stockpile.

I could do it. It'd be a world for the strong then, for the unhesitating, and that was a sweet strong dram. And before I knew it, I was off on the whole Apocalypse trip: I'd pull together some of hardass guys and butch women; we'd grab some remote parcel, and cut the roads nearby with explosives and blocked culverts; I'd learn hunting, and triage medicine, the hotwiring of cars and solar panels; we'd have caches, night vision goggles, camouflage outfits, and mark out fields of fire, strongpoints and perimeters; there'd be a rusty windmill and row after row of canned food on the shelves in our bunker -- it'd be like the Whole Earth Catalog, circa 1974, run backwards through a filter of the Anarchist Cookbook and 2600. It'd be fun, good clean rough living. In time, we'd move back into the cities and hunt deer on the abandoned overpasses, like Chuck Pahalniuk's Space Monkeys. We'd do fine. I knew it.

I knew it because I'd dreamed it hundreds of times before. I'd grown up reading stories of life after the Apocolypse, starting with the comic book Kamandi: the Last Boy on Earth (where a blond youth such as myself wandered a post-nuclear world where the animals had mutated, taken over and rebuilt a surreal mimic of our civilization) and moving on to watching Road Warrior and running role-playing-games set in a ruined future. Indeed, the only thing I liked better than survivalist stories were POW escape stories, where valiant downed officers fulfilled their duty to escape and harass the enemy by tunneling underneath the wire, with civilian clothes cut from their uniforms and dyed with blackberry juice, hand-forged documents printed on the end pages of their bibles and steely glints in their eyes...

From a very young age, then, I'd dreamt of escape and survival, which is a pretty obvious and cliché coping tactic when you're young, not-entirely-happy, and feel very, very alone. Painfully shy, with parents whose reliability was entirely anyone's guess, moving from place to place and shuttled back-and-forth, I developed an inner life comprised of fantasies where I was stunningly competent, self-contained, and entirely up to mastering the end of the world and still getting home in time to impress the girls.

As I grew older, I recognized all these dreams of guns and survival and conquest and escape for the adolescent fantasies they were. But that doesn't mean that they entirely lost their hold on me. Indeed, in some odd way, the more I found out about how barely the world was held together, the more deeply some part of myself cherished the idea that I could insulate myself emotionally from all of this because, I, at least, was a survivor.

And sitting there by the slack and dirty water, I had one of those moments of scorching self-vision. I realized that I'd been hiding underneath the skirts of the apocalypse for decades now. I'd daydreamed disasters as a way of not wanting too much, not caring too much; keeping safe from the fear too much knowledge of current events tends to tattoo on your brain.

But real apocalypses are sordid, banal, insane. If things do come unraveled, they present not a golden opportunity for lone wolves and well-armed geeks, but a reality of babies with diarrhea, of bugs and weird weather and dust everywhere, of never enough to eat, of famine and starving, hollow-eyed people, of drunken soldiers full of boredom and self-hate, of random murder and rape and wars which accomplish nothing, of many fine things lost for no reason and nothing of any value gained. And survivalists, if they actually manage to avoid becoming the prey of larger groups, sitting bitter and cold and hungry and paranoid, watching their supplies run low and wishing they had a clean bed and some friends. Of all the lies we tell ourselves, this is the biggest: that there is any world worth living in that involves the breakdown of society.

I sat there and felt foolish. Another boat went droning by in the distance. First light was breaking to the East. And, whatever happened, I decided, planning for failure was no longer an option. I still couldn't tell you what success looked like, but I knew then that I was long past childhood, and done with thinking like a twelve year-old boy. I wanted to look the future square in the face, and not look away, ever again.

A breeze was picking up. Dawn was not far off now.