The One Number You Need to Know

The climate fight has a new clarity, and that clarity can be summed up in a single number. 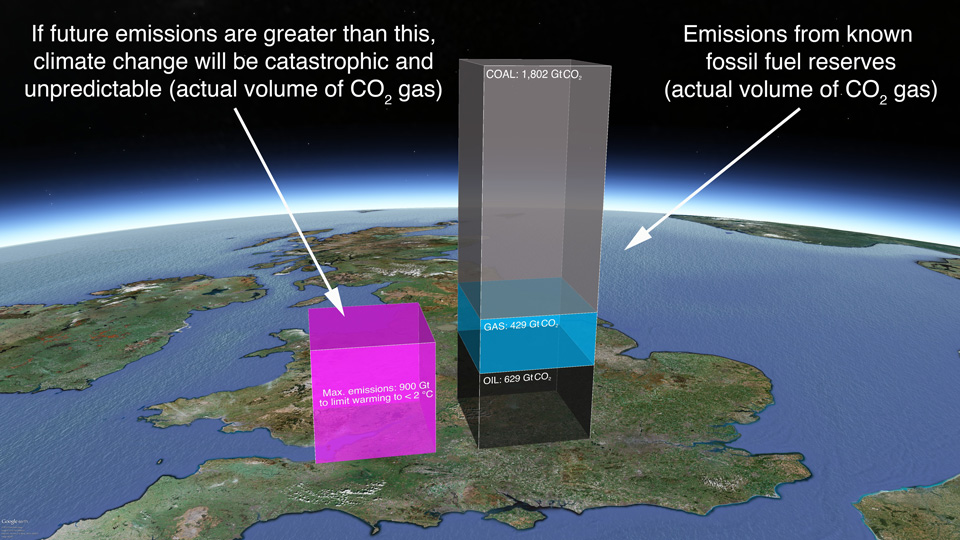 I wrote recently about the latest IPCC report. One key point is that the latest report closes the book on the idea that there’s any honest debate left on the reality and cause of climate change (the climate is already changing and almost entirely because of human emissions, concludes the largest, most rigorous scientific process in history). That conclusion made headlines world-wide, and for good reason: it’s the most fundamental physical reality of our age.

But the other key point has been less well-discussed, in part because it’s harder to grasp. That point, summed up, is this: we need to plan for the day when we emit no excess greenhouse gasses at all, and that day must come within the lifetimes of people alive today. As I wrote last year, humanity’s goal is not some vague “lower emissions” at some distant date in the future: it is carbon zero as soon as possible

“[W]e need to face a fact almost no one likes to discuss: We need to hit zero. That is, we need, as a species, to bring our global climate emissions into balance with what nature can safely absorb (actually, because we need to start rolling greenhouse gas concentrations backwards, we almost certainly need to emit less than nature can absorb, in order to take CO2 back out of the atmosphere and get back to safer greenhouse gas levels, of 350 ppm or less — but one shocking reality at a time is enough).”

Zero emissions reflects the reality that the more greenhouse gasses add up in our atmosphere, the more damaging (and also catastrophically unpredictable) the consequences become. As we emit more, the total concentration of those gasses rises in our atmosphere. In order to avoid catastrophe, we need to limit that total concentration, meaning with every tonne of CO2 we emit, we have one tonne less of emissions in our “carbon budget.” Emissions we release today means emissions we cannot possibly afford to release in the future.

This reality of a global carbon budget has some profound implications, as I noted when discussing the IPCC:

“[O]nce we agree on a carbon budget, who gets to “spend it,” and on what? What must those remaining gigatonnes buy us in order to create sustainable prosperity for everyone over the long haul?

“We don’t discuss enough the reality that whatever the budget we choose, at some point, we will have “spent” it and be left with a budget of zero. … Zero emissions will likely mean a net-zero approach, where we emit no more than carbon sinks absorb (it’s essentially impossible to eliminate all our emissions and feed billions of people). It may also not be a bold-enough goal. We may find ourselves needing to “run the clock in reverse” by not just zeroing-out but restoring the health of climate sinks, engaging in massive reforestation and sequestering carbon through approaches like agricultural biochar.

“Whatever our eventual approach, we need to have constantly in mind the need to bring the net flow of anthropogenic climate emissions to zero. This reality—that the goal is zero—redefines how we think and talk about climate action, I believe, but it is one of the statements both scientists and policy makers find extremely difficult to make.”

If anything, I underplayed this notion. Because here’s the thing: we know the budget.

The IPCC report is actually very clear that if we want to have a good chance of keeping our Earth from heating up more than 2ºC*, we have to limit the concentration of greenhouse gasses to 1,000 GT (or, more specifically, one trillion tons of equivalent carbon dioxide**).

We’ve already used almost half or more than half that budget, depending on how you do the math***. To spend what’s left in the sanest way, we must get real about the use of every tonne of CO2 we emit — squeezing it for its greatest possible contribution to humanity’s future. All human emissions will contribute to the tragedy unfolding around us: wasteful emissions are both tragic and senseless.****

One thousand gigatonnes is a big number; especially since even a gigatonne of CO2 represents a vast array of human sources of pollution. Merely imagining all the parts of our economy we need change to eliminate even 1 GT of CO2 can boggle the mind. The scales involved can make this problem can see completely out of our grasp. It’s not.

Indeed, two of our new conceptual tools can work together to actually make this challenge easier to understand. Carbon budgets can work powerfully with consumption-based carbon footprinting to not only show us how much we can emit, but the how the sources of our current emissions are both systemic and particular.

Yes, everything around us needs to evolve towards zero emissions. Yes, most of our emissions now are systemic (that is, demands by users create emissions elsewhere in ways that are sometimes hard to see, ways that need to be described through footprinting to fully understand). But what we need to change is not abstract and all-consuming, but rather particular in our own lives, careers, communities, companies and cities. We can start the march toward zero by changing the workings of the systems with which we’re connected. (I wrote a book about how we can make that happen in our own cities, Carbon Zero.)

We need transformation, for sure. But that transformation will be the total impact of many changes at many scales, adding together to slash emissions across the board. There are big moves we should make (more on that soon), but also a myriad of mid-sized moves, moves that happen in systems big enough to matter, but contained enough that groups of people can actually change them.

As long as we keep out budget in mind — keep focused on the draining hourglass of those 1,000 GT — we will start to see not only the urgency of deep emissions cuts, but the opportunity to be found in making them.

More on that topic soon, as well.

**Or “CO2e” — this article gives a good explanation of the term.

***The definitional complexities of what’s included and how it’s counted/estimated are non-trivial, and I’ll explore them in another post.

****Unfortunately, the UNFCC itself seems unready to center the discussion of climate action around the budget the IPCC identified: “Christiana Figueres, executive director of the UNFCCC, said carbon budgets were a good scientific exercise but said that they could not be the basis for negotiations. ‘I don’t think it’s possible… Politically it would be very difficult. I don’t know who would hold the pen [in setting out allocations of future budgets].'” [That difficulty, of course, is the very core of the problem we face, so avoiding it seems like a failure to me.]