Consider the simplified case of a city with a total of five rentals ranging from cheap to expensive, and five people living in them with corresponding incomes. Along comes a wealthy newcomer who offers more for the most expensive unit, so the landlord raises the rent and the newcomer gets the unit because the current tenant can't afford to pay that much.


Now consider how that scenario changes dramatically when there is one simple difference: a newly built expensive rental is available. The wealthy newcomer rents that unit, and that's it—nothing changes for any of the existing five renters. No rents are raised, and no one is displaced. As counterintuitive as it may seem, the creation of a new expensive rental prevented displacement of the poorest renter.


Today in Seattle, the scenario of the lacking new unit is the fundamental process behind declining affordability and increasing displacement. And that's why the ever popular sport of bashing "greedy developers" for building "luxury" housing is actually doing more harm than good.

The Three Levers of Civic Engagement 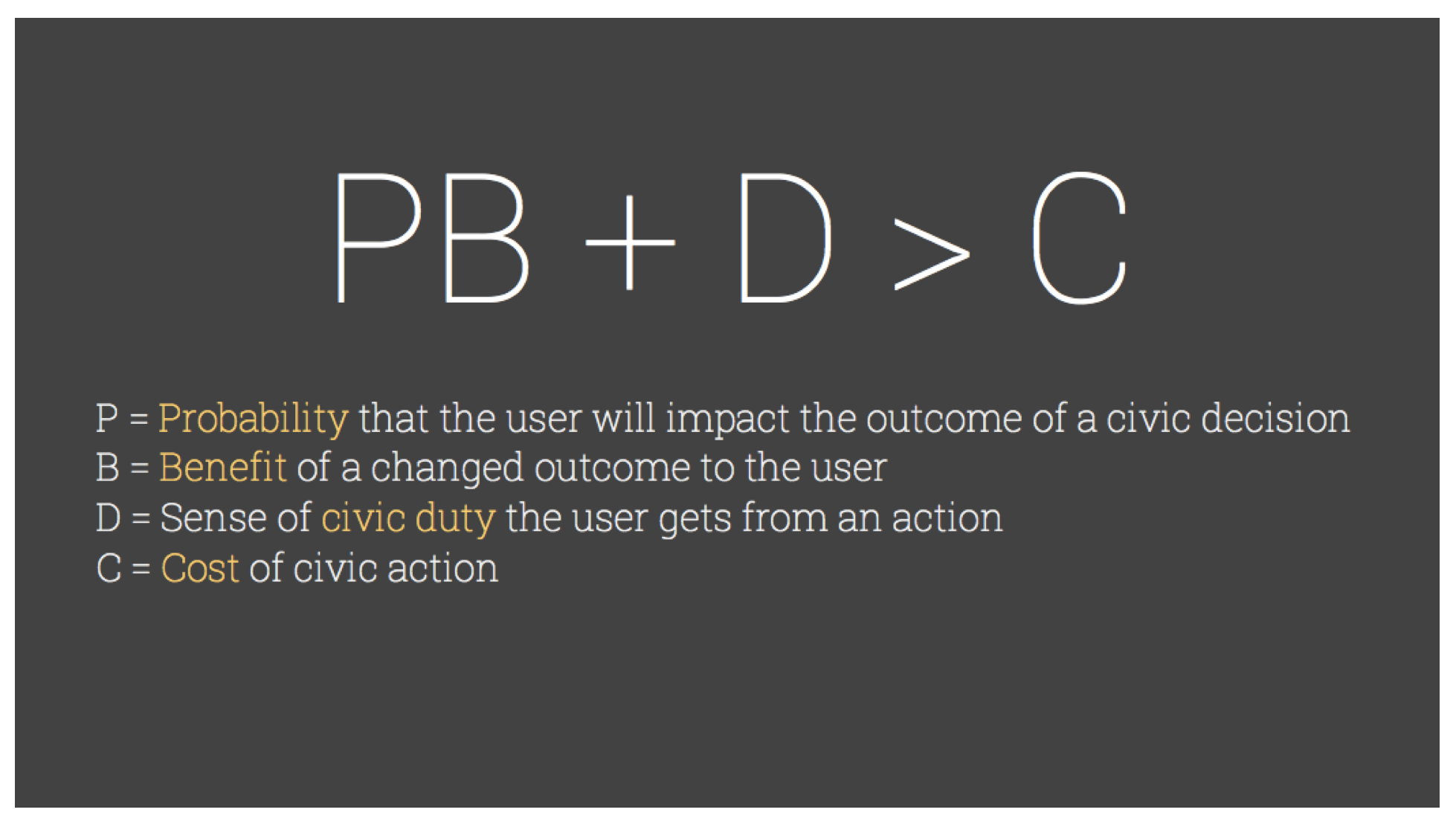 Benefit
B is the benefit the citizen as an individual will receive if the civic decision swings in their favor. As an example, if I have a pre-existing condition, the passage of the Affordable Healthcare Act would be a very real and measurable benefit to me. Or, if I had a lot of money invested in the stock market, a change to the tax code that cut capital gains tax would increase my net worth.

Duty
The good professors William Riker and Peter Ordeshook referred to D as Civic Duty. But I think it’s something more than that. D represents feelings of goodwill, and the sense of being part of something bigger than yourself. D is the pleasure people get from wearing an “I Voted” sticker and the pride they feel by being good citizen. It is the sum total of enjoyment a person gets from being part of a communities’ civic life.

Cost
C is the time, effort and financial cost of taking a civic action.

First: Sea level rise is accelerating—perhaps faster than the IPCC has projected. When McNoldy tracked the average daily high water mark, when flooding events are most likely to occur, he saw it increase over time—but he also saw the rate of that increase go up. The last five years saw an average increase of 1.27 inches of water per year. If that rate holds steady for the next 50 years (and if McNoldy is right, it will only get worse), high tide levels in Miami would go up over five feet.

Second: Predictions about day-to-day tide levels are less accurate than ever, threatening the city's ability to plan for weather events. Tidal predictions are made through what's called "astronomical factors"—essentially the moon’s orbit around the earth. But these don't take into account factors like weather or sea level rise—so as climate change exacerbates sea level rise, tidal predictions will be more and more unreliable. While water levels in May 1996 typically were close to predicted values, McNoldy observed that the same values in May 2014 were consistently higher than predicted. That kind of discrepancy can't be caused by weather alone.

Third: Besides creating higher risks of flooding, sea level rise is creating an unexpected danger: saltwater intrusion into aquifers used to extract freshwater. Almost 90 percent of south Florida's drinking water is supplied by porous limestone aquifers. As sea levels rise, the saltwater exerts more pressure on the fresh water in the aquifer, and fresh water is pushed off further from the coast. Already, some cities have shut down wells because of saltwater contamination.