by Alison Cantor 🌻
on April 27, 2015
In honor of Elizabeth Kolbert's much-deserved Pulitzer Prize win for her book The Sixth Extinction: An Unnatural History (go read it!) we thought we'd hark back to this post on extinction Alex wrote a few years back. This was posted on Worldchanging.com on January 24th, 2007. 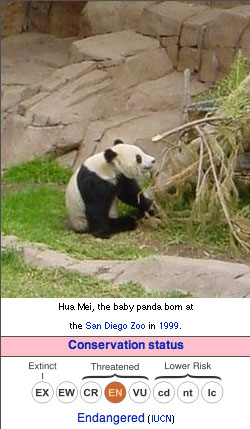 When I was a child, we had a set of coffee table books full of photos and descriptions of world's marvelous animals. The Baiji, or Chinese river dolphin, was one of these animals, an exotic -- and it seemed to me improbable -- beast from the other end of the world. I felt then, and feel now, a certain sense of fellowship with such critters, which are, after all, our evolutionary cousins.

So it saddened me to read that the Baiji is no more.

It's an unpleasant fact of 21st century life that we live in the midst of the Sixth Extinction, and we can expect to hear of the departure of beloved species on a regular basis. Today the river dolphin, tomorrow the polar bear?

If it's true that “the first rule of intelligent tinkering is to save all the parts" we need to wrap our brains around extinction, and really understand the various ways in which it is happening, and the potential responses available to us as we search to preserve our planet's biodiversity.

A few such resources have recently crossed my desktop, and so I thought I'd share them. I welcome reader suggestions for others in the comments.

The EDGE of Existence aims to spread awareness of the world's evolutionarily distinct and globally endangered animals (you know, weird ones like the Sumatran rhinoceros, the Aye-aye and the Golden-rumped elephant shrew), and build support for their protection. Their site is not only educational, it's beautiful and absorbing.

SEED's extinction cribsheet (PDF) is worth downloading. It's crammed with some useful explanations of ideas like the Bottleneck Effect and Coextinction.

Savvy readers will note that I linked to the Wikipedia articles referencing the two concepts above; that's no accident, and in fact, I've found much of the biology content on Wikipedia to be clear, accessible and useful (though there's always time to mess that up). Take as an example the entry explaining the concept of Conservation Status, which is "an indicator of the likelihood of that species continuing to survive either in the present day or the future," a sort of report card on a given species' long term prospects. (Wikipedia uses, as part of its manual of style, a system based on the IUCN "Red List.".)

Conservation International's Biodiversity Hotspots page, is worth a visit. offering as it does a good overview of why certain places are biologically richer than others, and why protecting those places is an important part of any plan to retain as much of the richness of life as possible.

Of course, none of these resources will help get you through the blue feelings most of us get when contemplating extinction. For that, we may need deeper cultural efforts, a playful expedition into an evolutionary game like Spore or just a good walk in the park on a sunny Spring day.

Coming from a country where the last Cheetah was hunted out of extinction in the 1940s and where arguably one of the most magnificent of animals survives just because of the efforts of a few dedicated people, extinction hurts. Sometimes animals become extinct of their own accord, due to natural calamities, the loss of habitat, but when it is caused by human action, some of it as ridiculous as hunting/poaching, it is simply, to borrow from Roger Waters, a wrenching waste

Given the scale and rate of growth of unbridled human consumption/production/propagation activities occurring now on the surface of the small finite planet we inhabit, what probability exists that Homo sapiens are unknowingly moving toward extinction in these early years of Century XXI?

Emerging data regarding the unrestrained per human consumption of limited resources, the untethered expansion of a seemingly endlessly growing world economy and the unrestricted increase of absolute global human population numbers are naturally persuasive and appear to indicate that these currently unregulated global activities are patently unsustainable.

Please see the scientific evidence from Russell Hopfenberg, Ph.D., and David Pimentel, Ph.D., on human population dynamics and the human overpopulation of Earth.

The Species Alliance is an impressive new advocacy effort coming out of the bay area. They are making a film and developing a curriculum around the extinction crisis.

Cheetahs, pandas, polar bears, chimpanzees...the list of mammalian species at risk of extinction is a long one, but for the most part fairly well established.

What is less established are the thousands, hundreds of thousands, perhaps millions of other species that we are losing every year. These species often don't have names, scientific or otherwise, and are as unglamorous as soil bacteria and rainforest beetles.

I remember setting insect traps in the forest floor as an ecology student, wondering about the different species we were capturing. Insects, even in a not-so-diverse place like Michigan, are notoriously difficult to identify at a species level, and it's quite possible we were trapping endangered species without even realizing it (doubtful, but possible).

So maybe we should think twice before we squish bugs, or fumigate plants, or pave open space. After all, its the little critters that we don't see that hold together the delicate web of life that sustains us all.

An added reason to feel fellowship with creatures going extinct is that our species is hardly exempt. Our actions threaten a global tipping point toward runaway climate change through release of global-scale carbon sinks including tundra methane, tropical rainforests, peat bogs and continental shelf methane hydrates, as well as general releases from soils and vegetation. A bluewater summer Arctic will make the planet a better solar collector. Meanwhile ocean stratification is already reducing the capacity of ocean plankton to take up carbon. Oceans and forests take up about half the carbon we release now. So we lose those functions and we effectively double our emissions. Peter Cox of the UK Hadley Center has done just about the best job of modeling feedbacks, and he gets mindboggling numbers that double the top IPCC projections, something like 20 degrees Fahrenheit. For reasons like this, James Lovelock thinks the planet is ready to eliminate our species, or maybe breeding pairs will survive in the Arctic. For a species so clever as ours to go extinct may seem impossible. But when you look at the forces we are unleashing, and understand the civilizational impacts may unleash other unpleasantries like nuclear war in a famine stricken South Asia, it would be hubristic to think humanity might not be another spotted owl. Just something to brighten up your day.

Given the interconnected of human organisms and other organisms in complex ecosystems, what combination of hubris and faulty reasoning indicates to us that the human species is somehow assured evolutionary success and not subject to the recognizable fate of species like the spotted owl?

Let us imagine for a moment that the current scale of per human consumption, economic globalization and propagation of the human species, when taken together, are occurring synergistically and producing an overwhelming adverse impact on natural resources, ecosystem services and the integrity of Earth. Would reasonable and prudent people not choose at a minimum to consider how FURTHER UNBRIDLED INCREASES of per capita consumption, seemingly endless big business expansion and human reproduction could be sensibly and humanely restrained?

What preposterous combination of hubris, contrived logic, faulty reasoning, political convenience and economic expediency could be taking humankind down a "primrose path" to a patently unsustainable future for our children?

At least one real issue before the human species is certain global overgrowth activities of the human population. When will scientists examine, for example, virtual mountains of data indicating that the infinite growth of business conglomerations in a finite world cannot be maintained much longer by a small planet the size of Earth?

What, pray tell me, are the leaders at the WORLD ECONOMIC FORUM in Davos, Switzerland thinking and doing that could conceivably achieve MDG goals, Kyoto standards and a sustainable global economic structure in a timely manner, one that ensures a good enough future for our children?

My news wire, Extinction Blog (click on my name below for the link), covers news about endangered species and often includes links to help people take action. I hope you'll visit.