Things I Read, 5: Not Yet Locked in Car Dependence, Mobility on Demand, Bubble Tea Housing, the Second Eradicated Disease and Repressive SpyWare

The new study, by five European and American researchers and published Monday in Proceedings of the National Academy of Sciences, pinpoints staggering potential climate benefits of smart growth, gasoline taxes and other measures that can reduce energy demand in urban centers, which is where a growing majority of the world’s population is becoming concentrated and where most of its energy is used. …They found the greatest opportunities to curb future energy use are in cities in developing countries, many of which have not yet locked in car dependency, the long commutes and the sprawling suburbs of less efficient urban centers. For those cities, good urban and transportation planning strategies were found to be key.

Death of the car: The tech behind Helsinki's ambitious plan to kill off private vehicles

Helsinki has an ambitious plan for its future. By 2025, the Finnish capital intends to revamp its public transport system to such an extent that private car ownership becomes pointless. The bold initiative is not just about providing more buses, trains, or taxis, but about creating a new transport infrastructure based on cutting-edge technology and a single, affordable payment system.

The theory goes like this: imagine a family that has opted not to own a car. When they want to drop the kids off at school, they simply arrange an on-demand bus service instead. They use ridesharing and buses to get to work, and in the holidays they rent a car to travel to their summer house. When they need to get around Helsinki, they use city bikes, renting a locker to store any heavy bags. If the weather changes while they're out cycling, a journey planner will alert them and suggest another way of reaching their destination without getting soaked.

Under the plan, all these services will be accessed through a single online platform. People will be able to buy their transport in service packages that work like mobile phone tariffs: either as a complete monthly deal or pay as you go options based on individual usage. Any number of companies can use the platform to offer transport packages, and if users find their travel needs change, they'll be able to switch packages or moved to a rival with a better deal.

The problem of urban density and housing costs is global. As unit types get smaller however, land costs coupled with developer driven profit margins can merely create a provisional housing type with little social value. By mining the discrepancy between maximum floor area ratios and maximum zoning envelopes, Songpa Micro-Housing provides a new typology that extends the limits of the housing unit to also include semi-public circulation, balconies, and the thickness of walls. Like the ambiguous gel around a tapioca pearl, this ‘Tapioca Space’ becomes a soft intersection between public/private and interior/exterior, creating social fabrics between neighbors. 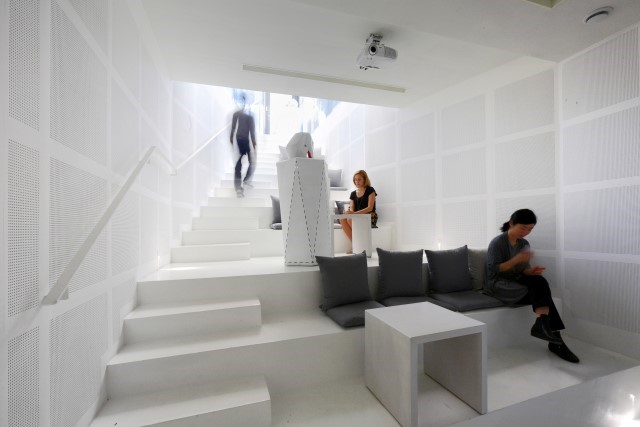 Fourteen ‘unit blocks’ allow residents to either claim a single space, or in the case where a couple or friends desire to do so, recombine the blocks for larger configurations. This flexibility accommodates changing live and work situations allowing residents to occupy the building longer and therefore more sustainably. Further generating the idea of community, exhibition spaces on the ground floor, basement, and second floors are spatially linked to the units as a shared living room. Although the zoning regulations requires the building to be lifted for parking, this open ground plan is also used to pull pedestrians in from the street and down a set of auditorium-like steps, connecting city and building residents to the exhibition and cafe spaces below.

The building is owned and operated by the innovative artist collective Everyday Mooonday.

The Second Disease Ever Eradicated: Only 126 cases of Guinea worm remain before the parasite disappears from humanity entirely.

In 1986, cases of Guinea worm disease numbered more than 3.5 million worldwide. Now, globally, there are only 126 cases left… The disease was endemic in an estimated 23,735 villages across 21 Asian and African countries like Ghana, India, Pakistan and Yemen in 1991. Now, only 30 villages in four countries—Mali, Chad, Ethiopia, and South Sudan—harbor the worms. The feat comes from decades of public-health intervention. Once inside a human host, the Guinea larva develops into a long, pale worm within a year. Then, over the course of 30 days, it emerges from the infected person’s skin through painful, swollen welts. “Imagine a worm one meter long coming out of your skin for, on average, 11 weeks. That in itself is a nightmare to me,” Craig Withers, a program director at the Carter Center, said at the event. “It’s sort of like ‘Alien’ in real life.”

A Spy in the Machine: How a brutal government used cutting-edge spyware to hijack one activist's life

One day in 2011, [human rights activist Moosa Abd-Ali Ali] opened the Facebook Messenger app on his iPhone. What he saw was chilling: someone else typing under his name to an activist friend of his in Bahrain. Whoever it was kept posing personal questions prodding for information, and Moosa watched unfold right before eyes. He panicked.

"It was like, ‘What’s going on? What’s happening?’" he recalls. He changed his password, alerted his friend, and stopped using Facebook Messenger — but the intrusions kept coming.

In another instance, Moosa noticed that someone posing as him solicited his female Facebook friends for sex — part of an effort, it seemed, to blackmail or perhaps defame him in Bahrain’s conservative media. Facebook was only the beginning. Unbeknownst to him, Moosa’s phone and computer had been infected with a highly sophisticated piece of spyware, built and sold in secret. The implant effectively commandeered his digital existence, collecting everything he did or said online.