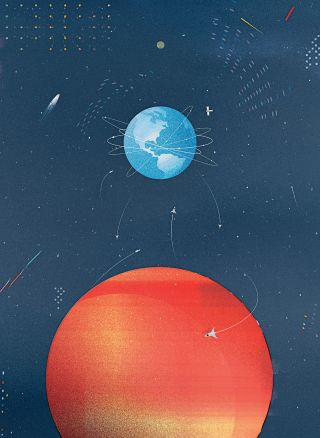 What’s behind the dream of colonizing Mars?

Conway puts himself on the side of science, and, as far as he’s concerned, humans are the wrong stuff. They shouldn’t even be trying to get to another planet. Not only are they fragile, demanding, and expensive to ship; they’re a mess.

“Humans carry biomes with us, outside and inside,” he writes. NASA insists that Mars landers be sterilized, but “we can’t sterilize ourselves.” If people ever do get to the red planet—an event that Conway, now forty-nine, says he considers “unlikely” in his lifetime—they’ll immediately wreck the place, just by showing up: “Scientists want a pristine Mars, uncontaminated by Earth.” If people start rejiggering the atmosphere and thawing the regolith, so much the worse.

“The Mars scientists want to study won’t exist anymore,” Conway writes. “Some other Mars will.”