What the Yeti Crab Has to Teach Us

**From the archives. This piece was originally published on Worldchanging.com on March 18th, 2006.**

Perhaps you've met this fellow before. This is the Yeti Crab, Kiwa hirsuta. Until last year, no one even knew he existed. 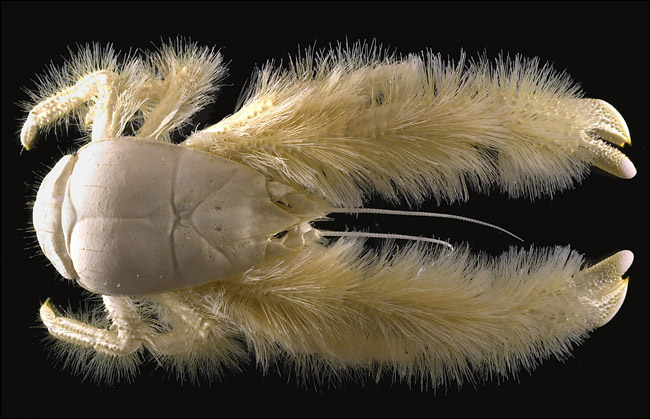 Yeti crabs live next to the volcanic vents 7,500 feet beneath the surface, 900 miles south of Easter Island, and they're pretty weird and mysterious creatures: they're blind, albino, only distantly related to other lobsters and crabs (they've been given a new taxonomical family) and we don't actually know how they manage to survive where they live.

"Dr Segonzac told the BBC News website that the 'hairy' pincers contained lots of filamentous bacteria. Some scientists think the bacteria detoxify poisonous minerals from the water, allowing K. hirsuta to survive around the vents. Alternatively, the animal may actually feed on the bacteria that live in the hair-like strands."

In fact, much about them is unknown. But mysterious though they are, in crustacean terms, they're rockstars: news of their discovery has swept the blogosphere, Mark Morford wrote a column about them, heck, people are even sewing stuffed Yeti Crabs.

But what, if anything, does their discovery mean? Well, the scientific meanings will take a long time to emerge, and may or may not end up being that interesting (though knowing how to filter poisonous water with tame bacteria would be a neat trick to biomimic). The cultural meanings are a different matter.

I think that we're so thrilled about discoveries like this because it sometimes seems like the world is too small, too crowded, too well-mapped, too known to admit the possibility of mystery and adventure. Discoveries like the Yeti Crab remind us that we still know very little about a great number of things. Our planet is still, largely, a mystery to us. As H. L. Mencken wrote, "Penetrating so many secrets, we cease to believe in the unknowable. But there it sits nevertheless, calmly licking its chops."

And that, I think is a worldchanging lesson in itself. As environmental pressures mount, it becomes obvious that some planetary management is likely to become necessary. Our best first bet, of course, is to do everything we can to turn down the greenhouse heat by cutting emissions as radically and quickly as possible, and to save all the parts by protecting protecting critical habitat and surveying the planet's genetic diversity.

But we've already screwed up pretty badly, and much of the evidence seems to suggest that no matter what we do now, we've already committed ourselves to profound climate change, species loss and ecosystem degradation. We can still head off the worst of it, but we can't avoid big problems now. We've bought the ticket, and we're going to take the ride.

One of the consequences of the state the planet's in is that we lose our innocence. We are impacting every system, every flow, every creature on Earth in some way, already. There used to be a time when we called nature humanity had changed "gardens" and nature humanity hadn't touched "wilderness." It's all gardening now.

There is no footprint-free world. Every block of the world's wildlands is already severely impacted. Not only are they internally impacted through macroevents such as the megafaunal extinctions and selective extraction of old-growth timber, but the very frameworks of their existence; global warming, acid rain, drained wetlands, green revolutions, wildland shrinkage, introduced pests, and many more-are set by Homo sapiens. The question is not whether we must manage nature, but rather how shall we manage it-by accident, haphazardly, or with the calculated goal of its survival forever?"

We have an obligation to become better gardeners. Consciously managing our impacts on the planet is a moral imperative, since our impact now extends to everything, so too must our vision.

And, this, to me, is the thought for which the Yeti Crab should become the mascot: we as a culture need to serve an apprenticeship with nature, and we need to do it now. We don't know much about the world, really. We're learning quickly, but ecological knowledge is an ocean, and we've only just left the shore.

We cannot refuse to act. We will have to be active gardeners. We won't have the luxury of full knowledge. But we needed be blind, and rush headlong into dangerous plans. We can act boldly but carefully, informed by a reasonable humility about our actual powers, and proceeding with open minds and light touches until we know more about what we're doing.

As I've written before, planetary management is as much an art as a science. The Yeti Crab reminds us that we're still only beginning to learn our art.

I think that Donald Rumsfeld said it best:

The trouble is that when you pay people to publish, and pay people to understand, they can't admit they are clueless. We do not reward people for discovering what they do not know except in very rare instances.

A university department that simply catalogued the unknown would do wonders, in a Borgesian way.

When I first saw this I thought it was a hoax. I'm loving that it isn't.

This great post echoes political scientist Walter Truett Anderson, who wrote twenty years ago that "we have acquired evolutionary responsibility . . ." Anderson's point was that seeing our impacts not simply on the world around us but on lineages created a wholly new sense of responsibility for the future. Things have gotten worse in twenty years, and our responsibility vastly greater. "Evolutionary responsibility" is both terrifying and alluring. Terrified, we will be paralyzed and reactive. Allured, we can still be creative. I still hope for the latter. Anderson did, too -- he thought respnsible "evolutionary governance" was still within reach.

Anderson's book is "To Govern Evolution," (Harcourt Brace, 1987) is out of print. Bring it back.

Thanks for a thoughtful post Alex. The gardening metaphor is apt, but may we extend it to "organic" or biological gardening? "Gardening" to some means constant intervention and control, an exertion of mastery and dominion. To others, it means an intricate dance with nature, encouraging and harnessing the amazing services nature provides.

Each is a kind of stewardship, of "gardening". But not all are world-changing.

I agree that not all gardening is created equal. I think the question, though, is not merely one of organic vs petrochemical (metaphorically) but of responsibility and care vs. the presumption that things are taking care of themselves.

I don't use chemicals on my backyard. But that doesn't mean that if I don't weed, rake, hoe and mow that what will grow there will be something desirable.

Okay, maybe a strained metaphor there, but I think you get where I'm coming from.

You comment on "To Govern Evolution" reminds me of something I was thinking about a ways back, which is lost worldchanging knowledge. There have been a number of classic works, works which would inform what we're all trying to do today, which have sort of vanished into the mists of time.

I wonder how we might go about bringing some of those to light again?

That guy's scary...I'd hate to meet him in a dark alley.

Re: Lost worldchanging knowledge. There are definitely some classic works that should be captured. But also some classic thinkers/writers whose value was as much in the example they set, as in any specific books they wrote. The 40s to the 70s was an era of some amazing synthesists, who helped lay the big picture foundation for a lot of good, more particular work in the 70s, 80s, and 90s. For a lot of reasons, there seem to be fewer such synthesists today, who are seeing the whole human challenge on the planet as a single problem. Fewer handles to that chalice. Lewis Mumford, Chris Alexander, Fernand Braudel, Paul Ehrlich, Donella Meadows -- who are their contemporary equivalents today? I'd put Jared Diamond on the list, maybe Amory Lovins, Jane Jacobs (who may have written her last book, Dark Age Ahead, which kind of says it all). It would be interesting to know who others consider the people who can best help us grasp the big picture in a useful, actionable way. And particularly the others from Europe, Africa, Latin America, Asia who should be better know to us parochial North Americans.

You say well what I was trying to say badly. As you point out, responsibility, care and plain old hard work are now our lots. My point is that our efforts, if directed at partnership instead of dominion, will make our work easier and more rewarding over time. That has certainly been my experience in organic gardening and farming, which I've practiced at a modest scale for about 30 years. I'm wondering if the metaphor we want is actually "marriage" - we need to wed with this planet, to love, cherish, honor, and such, and we need to work everyday to maintain our vows. I know that I feel married to the place I inhabit.

We're the synthesists today. We have a duty to share what we know. Our "parents" have gown older or passed on. Now it's our turn. For the first couple of years after Dana Meadows died, I often found myself viewing events and wondering what she would have done about them. I swear to you that one day I heard her voice, crystal clear in my ear saying, "Don't worry about what I would have done. I've died. What are YOU going to do?"

About the "evolutionary responsibility" pointed by Anderson, law and policy makers somehow tried to capture that in a legal principle generally called "intergenerational equity". This principle is a the roots of the 1992 Rio Declaration and Convention on Biological Diversity. Also in the concept of "sustainable development" carring about "future generations". Before that the Brundland report (88, "our common future"). Concrete applications are limited in environmental legal instruments : responsability and liability, the precautionary pple, environmental impact assessments, etc.
When it come to policy and political decisions, politicians are usually not very hot to take decisions going beyond the term of their mandate.

For more info on the concept: http://www.unu.edu/unupress/unupbooks/uu25ee/uu25ee0z.htm


Posted by: laurent on 22 Mar 06
archives
Spread the word!
Tweet