Designing the future of "Her" 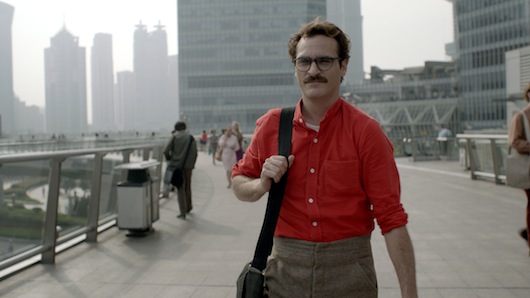 "We can't build what we can't imagine" is one of my mantras when thinking about innovation and the future. I believe it to be literally true, but I also think the statement works at a metaphorical level, and that much of the day's sense of doom and paralysis stems from the inability of most of us to look forward into new possibilities, to visualize a different sort of world. To conceive the future, we must first see it.

That's why I pay close attention to actual depictions of the future. A good portrayal of the future offers two things: first, a specific set of images that can widen our visual vocabulary of the future, and second, a set of design "moves" that can be learned from on their own terms.

I recently came back to "Her," Spike Jonze' terrific science fiction film about a lonely man who finds love with his AI operating system. The plot works in clever ways, but the core of the movie, its lifeblood, can be found in the work of production designer K.K. Barrett. "Her" offers, in my opinion, the most compellingly original look for the future in at least a decade.

When I was futurist in residence at IDEO, we had a lot of conversations about "Her" and the kinds of design thinking that went into the choices underlying the movie as an experience. Barrett himself is quite open about his process. If you have any interest in changing the future, you should have at least some insight into showing the future. I learned quite a bit by unpacking this film. I've shared some quotes, links and images below, in case you'd like to do the same.

"Her" has the most seamless futuristic design I've ever seen—at no point do you find yourself getting lost in some busy background, which seems to happen a lot with films set in the future, yet you still marvel at how realistically different it feels from our world now. How'd you pull that off?

When thinking about the future, people always think about technology and about what technology is rather than what the human experience with technology is. ... We took things away that were distracting. We took away noisy signage, traffic, the things that surround us in our current world, and by taking those things away we said, ‘Oh, now we’re beginning to be in the future.’ We didn’t really include a lot of innovation, we just cleaned up the present, left it littered with the best of what we know now, and then brought this sexy voice over the computer. 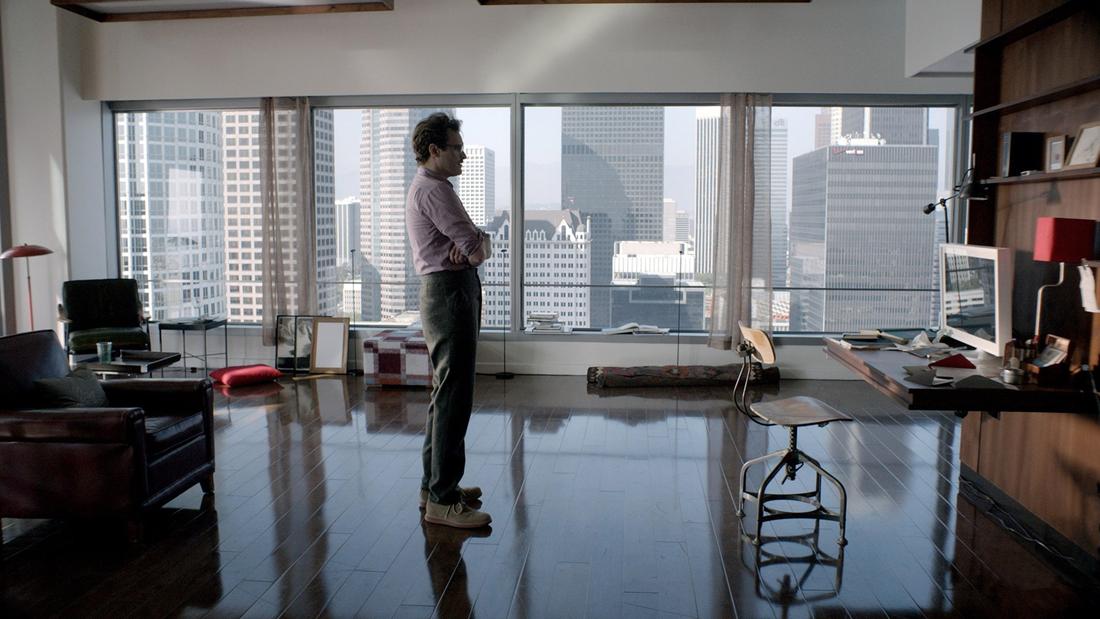 The Los Angeles you guys created rises very dramatically right outside his window.

It was hard to find the Los Angeles that, in the script, was much more built up and dense than the one that we know now. The myth that we’ve always been hoping for in Los Angeles is that this urban center downtown will become something practical, livable and enviable— we created that. The denser a population gets, the more need for green space. Spike had an idea of putting parks on top of rooftops, and strangely, when we went to Shanghai, China [to shoot the film] they also had a mandate to put green spaces on top of all their buildings.

Tell me about how you created that incredible Los Angeles skyline?

We looked in a number of different cities and finally landed in Shanghai for some of the bigger exterior shots with the big buildings and the circular walkway that was elevated above the street. That eliminated the need for showing traffic, which I didn’t want to do because cars would have dated us into some time period, and we couldn’t afford to make a hundred cars. Little by little the world came together, by addition and subtraction, and through collaboration with the creative team. 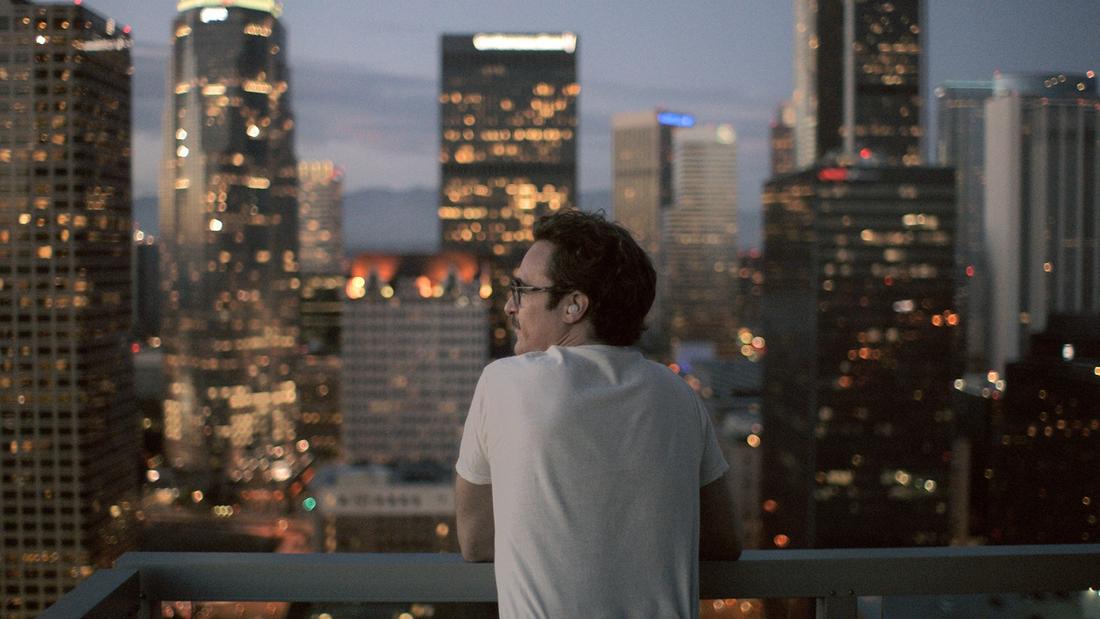 Below the Line: Designing ‘Her’

One way Mr. Barrett did this was by avoiding futuristic cars, or really any cars. The film takes place mostly away from street level, in a giant city that is an amalgamation of Los Angeles and Shanghai, merging the sprawl of one city with the pedestrian presence of another. The film was shot in both places incorporating elements of each metropolis.

"In Shanghai in Pudong, they have these elevated walkways so you can go from building to building without ever having to cross an intersection," Mr. Barrett said. "Already, that gave us a bit of a future slant, feeling like we’re comfortable pedestrians within the urban grid."

...Among the biggest challenges was the design of the film's technology: the device Theodore uses to communicate with his operating system as well as his computer monitor.

"With the device, we could have easily gone into the modern realm of a thin sheet of curved glass you could slip into your pocket, or a hologram," Mr. Barrett said. "But we didn't want to do something that wasn't tangible and wasn't real right now." 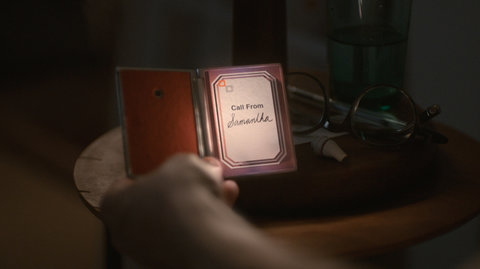 That was the first thing they worked on and Mr. Barrett said it took about six months to complete. Because they didn’t want to  call too much attention to futuristic notions and take away from the voice coming out of it, they decided to look to the past.

"We embraced a time when people had designed beautiful little address books and cigarette cases and lighters, things you could carry around in your hand and were very tactile."

Technology shouldn't feel like technology
One of the first things you notice about the "slight future" of "Her," as Jonze has described it, is that there isn't all that much technology at all. The main character Theo Twombly, a writer for the bespoke love letter service BeautifulHandwrittenLetters.com, still sits at a desktop computer when he's at work, but otherwise he rarely has his face in a screen. Instead, he and his fellow future denizens are usually just talking, either to each other or to their operating systems via a discrete earpiece, itself more like a fancy earplug anything resembling today's cyborgian Bluetooth headsets. 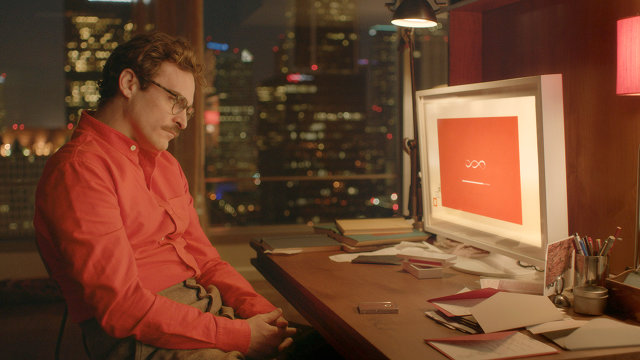 In this "slight future" world, things are low-tech everywhere you look. "We decided that the movie wasn't about technology, or if it was, that the technology should be invisible," he says. "And not invisible like a piece of glass." Technology hasn't disappeared, in other words. It's dissolved into everyday life.

Indeed, if you're trying to imagine a future where we've managed to liberate ourselves from screens, systems based around talking are hard to avoid. As Barrett puts it, the computers we see in "Her" "don't ask us to sit down and pay attention" like the ones we have today. He compares it to the fundamental way music beats out movies in so many situations. Music is something you can listen to anywhere. It's complementary. It lets you operate in 360 degrees. Movies require you to be locked into one place, looking in one direction. As we see in the film, no matter what Theo's up to in real life, all it takes to bring his OS into the fold is to pop in his ear plug.

Looking at it that way, you can see the audio-based interface in "Her" as a novel form of augmented reality computing. Instead of overlaying our vision with a feed, as we've typically seen it, Theo gets a one piped into his ear.

Five days of 'Her': Building a future to feel like the present

MN: It’s interesting. So many movies about the future do seem to be about the gizmos, a kind of James Bond fetish thing. But here most of the technology is so basic. The communication device looks like little more than a calculator.

KKB: We actually tried putting together something fancier; we played around with those ideas. And we kind of recoiled. Do we want something in the middle of the film that will be distracting, that will make people wonder how it works? And we realized we didn’t. So we decided to go for something more tactile.

MN: From where did you draw inspiration then?

KKB: From places you wouldn’t expect. We bought lighters and cigarette cases in this junk store, and then fountain pens and address books, and we modeled things after them. We wanted it to feel handcrafted. What feels better in your hand than a Zippo lighter? We wanted things to have that feel that way. 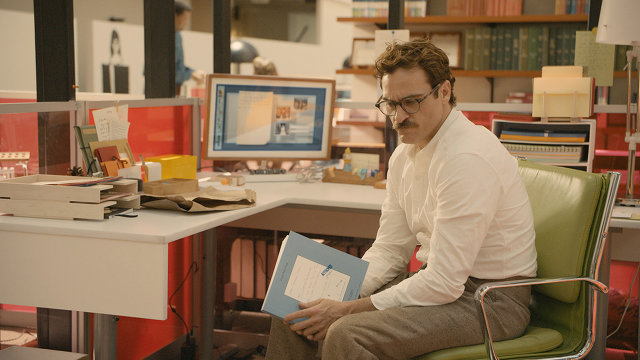 MN: The one tech change that was noticeable is the nearly utter lack of keyboards. People speak emails and have emails read to them. Images are manipulated by throwing them around a screen. Why did you make that exception?

KKB: I'm always amused at how in science-fiction, shows like "Star Trek," there are all these buttons and flashing lights. That never made sense to me. It seems to me like if you could you would just have direct communication with the computer. Also, a keyboard would have dated us. It’s like seeing cars in a period movie: You know it’s clearly from the '70s because that’s when cars looked like that.

MN: Speaking of a look-back with some of these colors, you and Spike have said you wanted to channel a bit of the 1930s. How did you arrive at that?

CS: The 1930s--I don't know why this happened—but it's a lost decade as a reference point. In all my years of costuming, no one ever says, "We want to have a 1930s feel." People will say the ‘20s, or the ‘40s, or '50s or '60s or '70s or '80s. But never the ‘30s. It’s almost like, because it’s coming out of the Depression but before the war, that no one understands it. It's become identity-less. And that makes it a really interesting time to draw from for the future. There’s a lot of that in the movie: I mean, the main character is named Theodore, which gives you a feel of an early America.

Designing a Future of Comfort, Color, and Gorgeous Gadgets in "Her"

The filmmakers struggled during pre-production to arrive at a visual identity for the operating system that changes Theodore's life. Barrett recalls, "We kept asking ourselves, 'What is his new desktop going to look like when he puts the new (Samantha) software in? Finally, Spike came to this brilliant realization, saying, 'There's a reason we haven't figured this out, because it shouldn't be anything.' When you install the new operating system, the screen goes blank, then comes back and looks exactly the same as it did before, except now her voice comes out. We wanted to make Samantha's voice be the center of attention."

Behind the Set Design of ‘Her’ 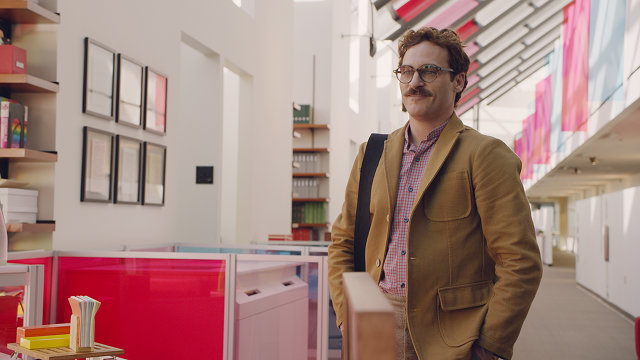 To compose the look and mood, Barrett favored a series of subtle adjustments toward what he called “a future that is around the corner, rather than some distant time where the audience would marvel at all the changes. It often takes just a couple of altered conceits to shed a different light on society. We are in Los Angeles so I thought, ‘Take away the cars. What would it be like if there was no noticeable traffic? What if there was a subway to the beach? Get in at Hollywood and step out on the sand. Take a weekend trip to a cabin in the snow on a high-speed bullet train.’”