Light and the Bright Green City

**From the archives. This piece was originally published on Worldchanging.com on February 9th, 2010.** 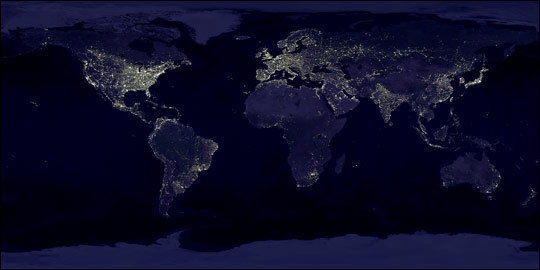 It's become a common slide at conferences: a map of the Earth at night, with the wealthier and denser areas shining brightly. Africa seen at night is largely dark, and this is often the point of the slide: look at how much energy some people have access to, and how little others do (which is true: almost 90% of Africans lack ready access to electricity, according to the World Bank), and, by inference, what gaps in economic prosperity persist.

But these maps don't actually display prosperity, or even energy use: instead, maps of brightness illustrate light pollution and energy waste. The blazing lights our satellites photograph while whizzing above us in their orbits, well, that's light that's serving no useful purpose (unless you want to think of our glowing cities as a form of art meant for distant eyes). Light seen from space is bouncing off illuminated surfaces, or being shone directly from bulbs aimed up. Neither is helping us on the ground see our cities better.

We could, we should, be treating light as precious, and getting clever about illuminating our lives with only the light we need. Using the minimum needed lumens would not only save a fair bit of energy, it would also bring the night sky back to our cities; it's the light bounced back by the atmosphere that hides the stars.

Seen from above, a bright green city would be only a smudge of light.

If you look at the lights at night comparison maps, you'll see that many areas have gotten darker over time (the northeastern US falls into this group). Often (though not always) this is because of municipalities that have changed zoning so that lights have to point down, rather than send up to 90% of their light off in useless directions.

That light is not only waste, but also light pollution that interferes with our views of heavenly bodies.

You can explore the images over time at (amongst other places):

Excellent insight, Alex. But of course, some of the light reaching surfaces would be reflected to the sky. What we see isn't all "wasted" light - but the point is well taken.