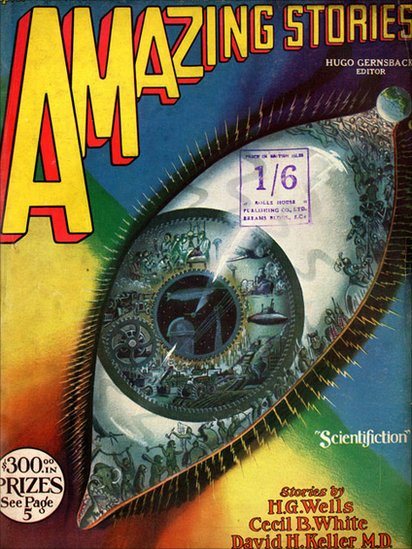 My first love was a Martian.

When I was about six I fell in love with Dejah Thoris. “The incomparable” Dejah Thoris, princess of Helium, first city of Barsoom, the Red Planet … Mars; beautiful, fierce, the flower of the aristocracy of a dying planet whose oceans had gone dry and whose air was maintained by atmosphere factories, For her, radium guns were fired, swords swung, sinking airships leapt from, six-legged beasts battled.

Like many young boys, I was hooked from the moment I cracked the binding of my first Edgars Rice Burroughs Mars book. From that day on, my boyhood afternoons were spent in Berkeley backyards turned to alien landscapes. I made porches and rooftops into spacecraft and turned anything at hand into sword or laser; every bed sheet was a cape. By the time Star Wars came out a few years later, I was a near-fulltime intergalactic hero.

All of this is to say that, like nearly all people alive today, from the earliest age I found myself aswim in stories about the future. Yet, not really about the future, instead about a set of places we called The Future. Nearly every person on the planet has now seen The Future. Even the poorest, most remote and traditional villages on Earth hear stories of The Future on the radio, or see them in the pages of magazines brought from distant cities. And telling stories about The Future is now one of the most truly global economic enterprises we have.  If you don’t believe me, go check out some Indian, Japanese, Chinese, Brazilian, Nigerian or South African science fiction. A Google search, a few clicks and you too can be in a Hindi-speaking moon colony, fighting Brazilian cyborgs in deep space or following the travails of refugee aliens in the slums of Jo’berg. The Future is universal among industrialized people, which is to say now, nearly every human being alive.

Indeed, stories of The Future have become so universal, so interwoven into all out cultural narratives, that we often forget that they are just that: stories. People invented them—people with their own histories and perspectives and troubles, who used The Future to make sense of their particular present. And who then passed their ideas down to us. When we begin to peer more deeply into the stories we tell ourselves about The Future, one of the most shocking things we find is that many ideas about what will be new are in fact quite old.

From space rockets to robots, alien abductions to post-apocalyptic survival, cloning to colonizing other worlds, perfect control of the nature world achieved through weather machines to an immortality achieved through uploading our consciousness into computers—all these ideas come down to us from tales more than a century old. Those stories sprang from the minds of men of the Victorian era (and, truthfully, we are talking about an almost entirely male endeavor at that time); they were composed with fountain pens or manual typewriters, in lamp-lit rooms warmed by fires, by those who’d never flown in an airplane, spoken to a person on another continent or even seen an electric toaster, for that matter. Our Future is a thing of the past.

Few of us look at The Future and understand the degree to which conflicts that obsessed the people of the last century (and the century before that) are the bedrock of many of its tensions. Those conflicts were, as we’ll see, often the product of the collision between ancient traditions and modernity—especially the revolutionary understandings of humanity’s origins, nature and place in the Universe which science unleashed (and which inflicted a wound on human cultures I think we’re still trying to heal), but also the near-cataclysmic acceleration of change experienced by people in the 1800s, when the very nature of the human world was utterly transformed in just a few decades, and neither monotheistic belief or the Enlightenment confidence in reason seemed able to keep pace. Many of our ideas about The Future were made in that world and reflect its tensions, but those tensions are not native to the 21st Century: We have new tensions, all our own.

Planetary thinking is an attempt to move beyond those old tropes—to take a fresh, honest, and systematic look at what our own present can tell us about the real future; or, alternately, to imagine new futures that help us, in William Gibson’s phrase, “predict the present.” It’s thinking that asks what kind of world we’re building for those who will come after—thinking that recognizes kinship with the people of the future. It is thinking that understands that the future is not a place; we are not going there. The future is simply now, plus time—we are not headed towards the future, we are already within it. And it can no more be free of its connection to us than we can to the past that lives amidst us in every face and place.

But we can’t begin to think well about what the future actually might want from us until we unpack the influence these antique visions have had on our thinking. The one thing these narratives all have in common is that they will not come true; even the inventions they imagined are physically realized, they will not mean what they meant in these stories. The Future will not come to be. The future we are making has little to do with the fantasy worlds of that dusty futuristic mythology.

To understand why, we’ll need to dig into some of these stories, and learn what drove those who made them. What we’ll see is that all these Futures responded to specific cultural tensions that arose during industrialization. They were not, then, reflections of some hard scientific reality or more accurate way of thinking—they were ways of trying to make sense of a world thrown into moral chaos, or of creating means of escaping from the tensions of that chaos (such escapism, in my opinion, not being nearly so bad a thing as some maintain).

It is not easy to separate what I’ve seen or read or dreamt about The Future as an imaginary place from what I’ve leaned about the future as a real extension of the present, and I assume I am not alone in this. But unless we learn how—unless we all in our own ways learn to sweep aide the dead dried flowers of tomorrows past—we will not be able to see the much more pressing and perhaps (we may find) thrilling possibilities that are in their spring all around us. Even with everything we’ve done wrong, the world is a riotous, bright green garden of previously unimagined ways of living, ways of seeing, ways of being human. We can, perhaps, make a world far wilder and more wondrous than anything that’s ever appeared on the silver screen or in pulp fiction, but we can’t build what we can’t imagine. And to imagine, we must free room in our imaginations for the genuinely new.

We can love these stories, still. But we need to begin to be able to see them not as guides to where we are going, but rather as tales of where we aren’t.